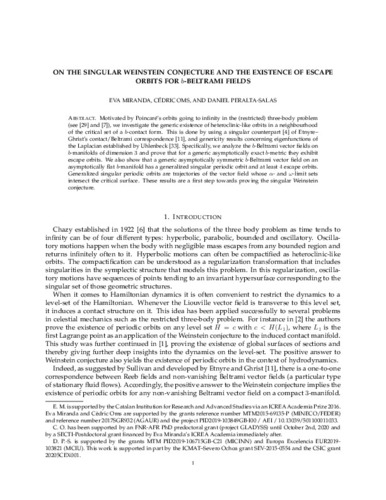 Oms, Cédric
Peralta-Salas, Daniel
Document typeResearch report
Rights accessOpen Access
Abstract
Motivated by Poincare’s orbits going to infinity in the (restricted) three-body problem ´ (see [29] and [7]), we investigate the generic existence of heteroclinic-like orbits in a neighbourhood of the critical set of a b-contact form. This is done by using a singular counterpart [4] of Etnyre– Ghrist’s contact/Beltrami correspondence [11], and genericity results concerning eigenfunctions of the Laplacian established by Uhlenbeck [33]. Specifically, we analyze the b-Beltrami vector fields on b-manifolds of dimension 3 and prove that for a generic asymptotically exact b-metric they exhibit escape orbits. We also show that a generic asymptotically symmetric b-Beltrami vector field on an asymptotically flat b-manifold has a generalized singular periodic orbit and at least 4 escape orbits. Generalized singular periodic orbits are trajectories of the vector field whose a- and ¿-limit sets intersect the critical surface. These results are a first step towards proving the singular Weinstein conjecture.
CitationMiranda, E.; Oms, C.; Peralta-Salas, D. On the singular Weinstein conjecture and the existence of escape orbits for b-Beltrami fields. 2021.
URIhttp://hdl.handle.net/2117/365683
Other identifiershttps://arxiv.org/abs/2010.00564
Collections
Share: