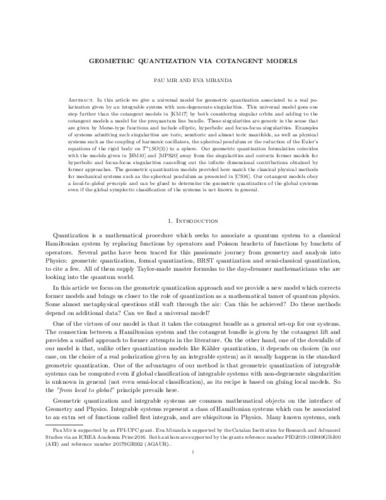 Document typeResearch report
Rights accessOpen Access
Abstract
In this article we give a universal model for geometric quantization associated to a real polarization given by an integrable system with non-degenerate singularities. This universal model goes one step further than the cotangent models in [KM17] by both considering singular orbits and adding to the cotangent models a model for the prequantum line bundle. These singularities are generic in the sense that are given by Morse-type functions and include elliptic, hyperbolic and focus-focus singularities. Examples of systems admitting such singularities are toric, semitoric and almost toric manifolds, as well as physical systems such as the coupling of harmonic oscillators, the spherical pendulum or the reduction of the Euler’s equations of the rigid body on T *(SO(3)) to a sphere. Our geometric quantization formulation coincides with the models given in [HM10] and [MPS20] away from the singularities and corrects former models for hyperbolic and focus-focus singularities cancelling out the infinite dimensional contributions obtained by former approaches. The geometric quantization models provided here match the classical physical methods for mechanical systems such as the spherical pendulum as presented in [CS16]. Our cotangent models obey a local-to-global principle and can be glued to determine the geometric quantization of the global systems even if the global symplectic classification of the systems is not known in general.
CitationMiranda, E.; Mir, P. Geometric quantization via cotangent models. 2022.
URIhttp://hdl.handle.net/2117/365667
Other identifiershttps://arxiv.org/abs/2102.02699
Collections
Share: