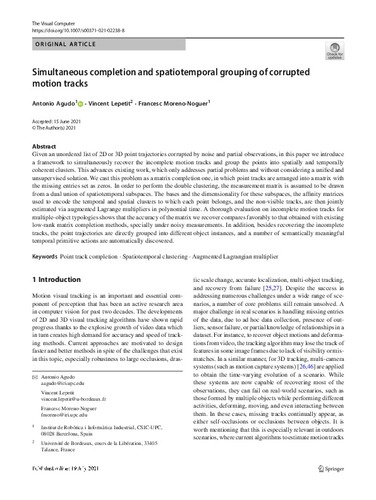 Document typeArticle
PublisherSpringer Nature
Rights accessOpen Access
Abstract
Given an unordered list of 2D or 3D point trajectories corrupted by noise and partial observations, in this paper we introduce a framework to simultaneously recover the incomplete motion tracks and group the points into spatially and temporally coherent clusters. This advances existing work, which only addresses partial problems and without considering a unified and unsupervised solution. We cast this problem as a matrix completion one, in which point tracks are arranged into a matrix with the missing entries set as zeros. In order to perform the double clustering, the measurement matrix is assumed to be drawn from a dual union of spatiotemporal subspaces. The bases and the dimensionality for these subspaces, the affinity matrices used to encode the temporal and spatial clusters to which each point belongs, and the non-visible tracks, are then jointly estimated via augmented Lagrange multipliers in polynomial time. A thorough evaluation on incomplete motion tracks for multiple-object typologies shows that the accuracy of the matrix we recover compares favorably to that obtained with existing low-rank matrix completion methods, specially under noisy measurements. In addition, besides recovering the incomplete tracks, the point trajectories are directly grouped into different object instances, and a number of semantically meaningful temporal primitive actions are automatically discovered
CitationAgudo, A.; Lepetit, V.; Moreno-Noguer, F. Simultaneous completion and spatiotemporal grouping of corrupted motion tracks. "Visual computer", 19 Juliol 2021,
URIhttp://hdl.handle.net/2117/365657
DOI10.1007/s00371-021-02238-8
ISSN1432-2315
Publisher versionhttps://link.springer.com/article/10.1007%2Fs00371-021-02238-8
Collections
Share: