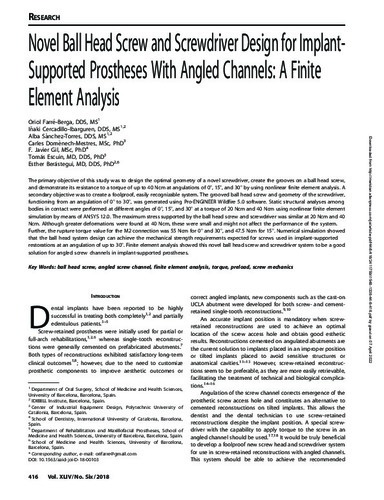 Except where otherwise noted, content on this work is licensed under a Creative Commons license : Attribution-NonCommercial-NoDerivs 3.0 Spain
Abstract
The primary objective of this study was to design the optimal geometry of a novel screwdriver, create the grooves on a ball head screw, and demonstrate its resistance to a torque of up to 40 Ncm at angulations of 0°, 15°, and 30° by using nonlinear finite element analysis. A secondary objective was to create a foolproof, easily recognizable system. The grooved ball head screw and geometry of the screwdriver, functioning from an angulation of 0° to 30°, was generated using Pro-ENGINEER Wildfire 5.0 software. Static structural analyses among bodies in contact were performed at different angles of 0°, 15°, and 30° at a torque of 20 Ncm and 40 Ncm using nonlinear finite element simulation by means of ANSYS 12.0. The maximum stress supported by the ball head screw and screwdriver was similar at 20 Ncm and 40 Ncm. Although greater deformations were found at 40 Ncm, these were small and might not affect the performance of the system. Further, the rupture torque value for the M2 connection was 55 Ncm for 0° and 30°, and 47.5 Ncm for 15°. Numerical simulation showed that the ball head system design can achieve the mechanical strength requirements expected for screws used in implant-supported restorations at an angulation of up to 30°. Finite element analysis showed this novel ball head screw and screwdriver system to be a good solution for angled screw channels in implant-supported prostheses.
CitationFarré, O. [et al.]. Novel ball head screw and screwdriver design for implant-supported prostheses with angled channels: A finite element analysis. "The journal of oral implantology", 1 Desembre 2018, vol. 44, núm. 6, p. 416-422.
URIhttp://hdl.handle.net/2117/365556
DOI10.1563/aaid-joi-D-18-00103
ISSN0160-6972
Publisher versionhttps://www.joionline.org/doi/10.1563/aaid-joi-D-18-00103
Collections
Share: