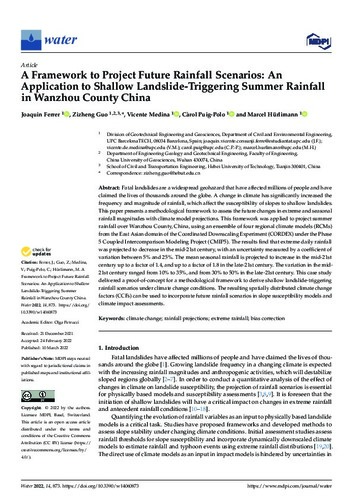 Except where otherwise noted, content on this work is licensed under a Creative Commons license : Attribution 4.0 International
Abstract
Fatal landslides are a widespread geohazard that have affected millions of people and have claimed the lives of thousands around the globe. A change in climate has significantly increased the frequency and magnitude of rainfall, which affect the susceptibility of slopes to shallow landslides. This paper presents a methodological framework to assess the future changes in extreme and seasonal rainfall magnitudes with climate model projections. This framework was applied to project summer rainfall over Wanzhou County, China, using an ensemble of four regional climate models (RCMs) from the East Asian domain of the Coordinated Downscaling Experiment (CORDEX) under the Phase 5 Coupled Intercomparison Modeling Project (CMIP5). The results find that extreme daily rainfall was projected to decrease in the mid-21st century, with an uncertainty measured by a coefficient of variation between 5% and 25%. The mean seasonal rainfall is projected to increase in the mid-21st century up to a factor of 1.4, and up to a factor of 1.8 in the late-21st century. The variation in the mid21st century ranged from 10% to 35%, and from 30% to 50% in the late-21st century. This case study delivered a proof-of-concept for a methodological framework to derive shallow landslide-triggering rainfall scenarios under climate change conditions. The resulting spatially distributed climate change factors (CCFs) can be used to incorporate future rainfall scenarios in slope susceptibility models and climate impact assessments.
CitationFerrer, J. [et al.]. A Framework to Project Future Rainfall Scenarios: An Application to Shallow Landslide-Triggering Summer Rainfall in Wanzhou County China. "Water (Switzerland)", 1 Març 2022, vol. 14, núm. 873, p. 873: 1-873: 22.
URIhttp://hdl.handle.net/2117/365456
DOI10.3390/w14060873
ISSN2073-4441
Publisher versionhttps://www.mdpi.com/2073-4441/14/6/873
Collections
Share: