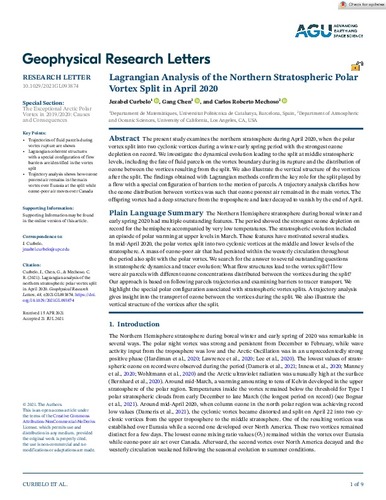 Mechoso, Carlos R.
Chen, Gang
Document typeArticle
Rights accessOpen Access
Abstract
The present study examines the northern stratosphere during April 2020, when the polar vortex split into two cyclonic vortices during a winter-early spring period with the strongest ozone depletion on record. We investigate the dynamical evolution leading to the split at middle stratospheric levels, including the fate of fluid parcels on the vortex boundary during its rupture and the distribution of ozone between the vortices resulting from the split. We also illustrate the vertical structure of the vortices after the split. The findings obtained with Lagrangian methods confirm the key role for the split played by a flow with a special configuration of barriers to the motion of parcels. A trajectory analysis clarifies how the ozone distribution between vortices was such that ozone poorest air remained in the main vortex. The offspring vortex had a deep structure from the troposphere and later decayed to vanish by the end of April.
CitationCurbelo, J.; Mechoso, C.; Chen, G. Lagrangian analysis of the northern stratospheric polar vortex split in april 2020. "Geophysical research letters", 28 Agost 2021, vol. 48, núm. 16.
URIhttp://hdl.handle.net/2117/365079
DOI10.1029/2021GL093874
ISSN0094-8276
Publisher versionhttps://agupubs.onlinelibrary.wiley.com/doi/10.1029/2021GL093874
Other identifiershttps://ui.adsabs.harvard.edu/abs/2021GeoRL..4893874C/abstract
Collections
Share: