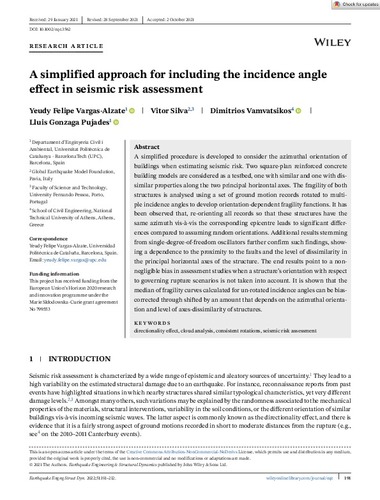 Except where otherwise noted, content on this work is licensed under a Creative Commons license : Attribution-NonCommercial-NoDerivs 3.0 Spain
ProjectKaIROS - Keeping and Increasing Resilience Opportunities and Sustainability of communities against earthquakes (EC-H2020-799553)
Abstract
A simplified procedure is developed to consider the azimuthal orientation of buildings when estimating seismic risk. Two square-plan reinforced concrete building models are considered as a testbed, one with similar and one with dissimilar properties along the two principal horizontal axes. The fragility of both structures is analysed using a set of ground motion records rotated to multiple incidence angles to develop orientation-dependent fragility functions. It has been observed that, re-orienting all records so that these structures have the same azimuth vis-à-vis the corresponding epicentre leads to significant differences compared to assuming random orientations. Additional results stemming from single-degree-of-freedom oscillators further confirm such findings, showing a dependence to the proximity to the faults and the level of dissimilarity in the principal horizontal axes of the structure. The end results point to a non-negligible bias in assessment studies when a structure's orientation with respect to governing rupture scenarios is not taken into account. It is shown that the median of fragility curves calculated for un-rotated incidence angles can be bias-corrected through shifted by an amount that depends on the azimuthal orientation and level of axes-dissimilarity of structures.
CitationVargas, Y. [et al.]. A simplified approach for including the incidence angle effect in seismic risk assessment. "Earthquake engineering and structural dynamics", 2022, vol. 51, núm. 1, p. 191-212.
URIhttp://hdl.handle.net/2117/364842
DOI10.1002/eqe.3562
ISSN1096-9845
Publisher versionhttps://onlinelibrary.wiley.com/doi/10.1002/eqe.3562
Collections
Share: