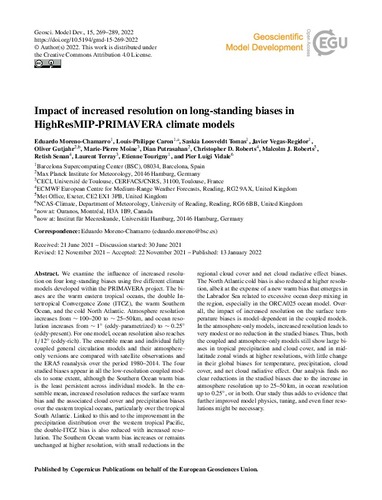 Except where otherwise noted, content on this work is licensed under a Creative Commons license : Attribution 3.0 Spain
ProjectPRIMAVERA - PRocess-based climate sIMulation: AdVances in high resolution modelling and European climate Risk Assessment (EC-H2020-641727)
Abstract
We examine the influence of increased resolution on four long-standing biases using five different climate models developed within the PRIMAVERA project. The biases are the warm eastern tropical oceans, the double Intertropical Convergence Zone (ITCZ), the warm Southern Ocean, and the cold North Atlantic. Atmosphere resolution increases from ∼100–200 to ∼25–50 km, and ocean resolution increases from (eddy-parametrized) to (eddy-present). For one model, ocean resolution also reaches ∘ (eddy-rich). The ensemble mean and individual fully coupled general circulation models and their atmosphere-only versions are compared with satellite observations and the ERA5 reanalysis over the period 1980–2014. The four studied biases appear in all the low-resolution coupled models to some extent, although the Southern Ocean warm bias is the least persistent across individual models. In the ensemble mean, increased resolution reduces the surface warm bias and the associated cloud cover and precipitation biases over the eastern tropical oceans, particularly over the tropical South Atlantic. Linked to this and to the improvement in the precipitation distribution over the western tropical Pacific, the double-ITCZ bias is also reduced with increased resolution. The Southern Ocean warm bias increases or remains unchanged at higher resolution, with small reductions in the regional cloud cover and net cloud radiative effect biases. The North Atlantic cold bias is also reduced at higher resolution, albeit at the expense of a new warm bias that emerges in the Labrador Sea related to excessive ocean deep mixing in the region, especially in the ORCA025 ocean model. Overall, the impact of increased resolution on the surface temperature biases is model-dependent in the coupled models. In the atmosphere-only models, increased resolution leads to very modest or no reduction in the studied biases. Thus, both the coupled and atmosphere-only models still show large biases in tropical precipitation and cloud cover, and in midlatitude zonal winds at higher resolutions, with little change in their global biases for temperature, precipitation, cloud cover, and net cloud radiative effect. Our analysis finds no clear reductions in the studied biases due to the increase in atmosphere resolution up to 25–50 km, in ocean resolution up to 0.25∘, or in both. Our study thus adds to evidence that further improved model physics, tuning, and even finer resolutions might be necessary.
Related documenthttps://gmd.copernicus.org/articles/15/269/2022/gmd-15-269-2022-supplement.pdf
CitationMoreno Chamarro, E. [et al.]. Impact of increased resolution on long-standing biases in HighResMIP-PRIMAVERA climate models. "Geoscientific Model Development (GMD)", 2022, vol. 15, p. 269-289.
URIhttp://hdl.handle.net/2117/364301
DOI10.5194/gmd-15-269-2022
ISSN1991-959X
1991-9603
Publisher versionhttps://gmd.copernicus.org/articles/15/269/2022/gmd-15-269-2022.html
Collections
Share: