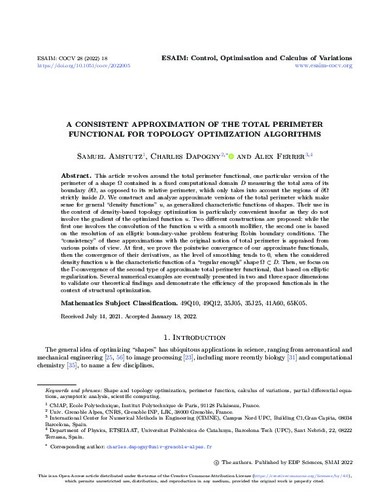 Document typeArticle
Rights accessOpen Access
Abstract
This article revolves around the total perimeter functional, one particular version of the perimeter of a shape O contained in a fixed computational domain D measuring the total area of its boundary ¿O, as opposed to its relative perimeter, which only takes into account the regions of ¿O strictly inside D. We construct and analyze approximate versions of the total perimeter which make sense for general “density functions” u, as generalized characteristic functions of shapes. Their use in the context of density-based topology optimization is particularly convenient insofar as they do not involve the gradient of the optimized function u. Two different constructions are proposed: while the first one involves the convolution of the function u with a smooth mollifier, the second one is based on the resolution of an elliptic boundary-value problem featuring Robin boundary conditions. The “consistency” of these approximations with the original notion of total perimeter is appraised from various points of view. At first, we prove the pointwise convergence of our approximate functionals, then the convergence of their derivatives, as the level of smoothing tends to 0, when the considered density function u is the characteristic function of a “regular enough” shape O ¿ D. Then, we focus on the G-convergence of the second type of approximate total perimeter functional, that based on elliptic regularization. Several numerical examples are eventually presented in two and three space dimensions to validate our theoretical findings and demonstrate the efficiency of the proposed functionals in the context of structural optimization.
CitationAmstutz, S.; Dapogny, C.; Ferrer, A. A consistent approximation of the total perimeter functional for topology optimization algorithms. "ESAIM. Control, optimisation and calculus of variations", 24 Febrer 2022, vol. 28, p. 18:1-18:71.
URIhttp://hdl.handle.net/2117/363918
DOI10.1051/cocv/2022005
ISSN1292-8119
Publisher versionhttps://www.esaim-cocv.org/articles/cocv/abs/2022/01/cocv210134/cocv210134.html
Collections
Share: