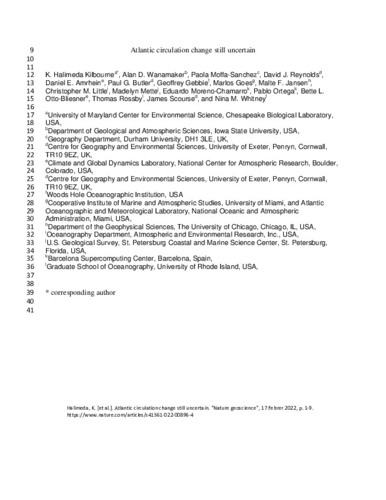 Document typeArticle
Rights accessOpen Access
All rights reserved. This work is protected by the corresponding intellectual and industrial property rights. Without prejudice to any existing legal exemptions, reproduction, distribution, public communication or transformation of this work are prohibited without permission of the copyright holder
Abstract
Deep oceanic overturning circulation in the Atlantic (Atlantic Meridional Overturning Circulation, AMOC) is projected to decrease in the future in response to anthropogenic warming. Caesar et al. 1 argue that an AMOC slowdown started in the 19 th century and intensified during the mid-20th century. Although the argument and selected evidence proposed have some merits, we find that their conclusions might be different if a more complete array of data available in the North Atlantic region had been considered. We argue that the strength of AMOC over recent centuries is still poorly constrained and the expected slowdown may not have started yet.
CitationHalimeda, K. [et al.]. Atlantic circulation change still uncertain. "Nature geoscience", Març 2022, vol. 15, núm. 3, p. 165-167.
URIhttp://hdl.handle.net/2117/363518
DOI10.1038/s41561-022-00896-4
ISSN1752-0894
Publisher versionhttps://www.nature.com/articles/s41561-022-00896-4
Collections
Share: