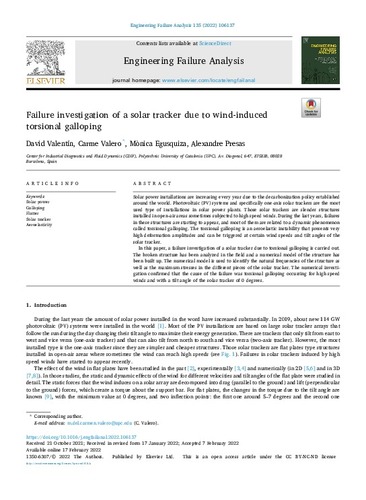 Document typeArticle
PublisherElsevier
Rights accessOpen Access
Abstract
Solar power installations are increasing every year due to the decarbonization policy established around the world. Photovoltaic (PV) systems and specifically one-axis solar trackers are the most used type of installations in solar power plants. Those solar trackers are slender structures installed in open-air areas sometimes subjected to high speed winds. During the last years, failures in these structures are starting to appear, and most of them are related to a dynamic phenomenon called torsional galloping. The torsional galloping is an aeroelastic instability that presents very high deformation amplitudes and can be triggered at certain wind speeds and tilt angles of the solar tracker. In this paper, a failure investigation of a solar tracker due to torsional galloping is carried out. The broken structure has been analyzed in the field and a numerical model of the structure has been built up. The numerical model is used to identify the natural frequencies of the structure as well as the maximum stresses in the different pieces of the solar tracker. The numerical investigation confirmed that the cause of the failure was torsional galloping occurring for high speed winds and with a tilt angle of the solar tracker of 0 degrees.
CitationValentin, D. [et al.]. Failure investigation of a solar tracker due to wind-induced torsional galloping. "Engineering failure analysis", 1 Maig 2022, vol. 135, núm. 106137, p. 106137: 1-106137: 11.
URIhttp://hdl.handle.net/2117/363426
DOI10.1016/j.engfailanal.2022.106137
ISSN1350-6307
Publisher versionhttps://www.sciencedirect.com/science/article/pii/S135063072200111X
Collections
Share: