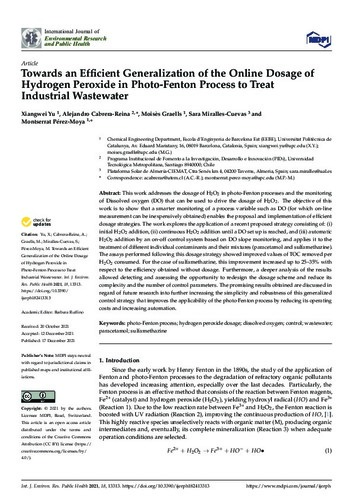 Except where otherwise noted, content on this work is licensed under a Creative Commons license : Attribution-NonCommercial-NoDerivs 3.0 Spain
Abstract
This work addresses the dosage of H2O2 in photo-Fenton processes and the monitoring of Dissolved oxygen (DO) that can be used to drive the dosage of H2O2. The objective of this work is to show that a smarter monitoring of a process variable such as DO (for which on-line measurement can be inexpensively obtained) enables the proposal and implementation of efficient dosage strategies. The work explores the application of a recent proposed strategy consisting of: (i) initial H2O2 addition, (ii) continuous H2O2 addition until a DO set up is reached, and (iii) automatic H2O2 addition by an on-off control system based on DO slope monitoring, and applies it to the treatment of different individual contaminants and their mixtures (paracetamol and sulfamethazine). The assays performed following this dosage strategy showed improved values of TOC removed per H2O2 consumed. For the case of sulfamethazine, this improvement increased up to 25–35% with respect to the efficiency obtained without dosage. Furthermore, a deeper analysis of the results allowed detecting and assessing the opportunity to redesign the dosage scheme and reduce its complexity and the number of control parameters. The promising results obtained are discussed in regard of future research into further increasing the simplicity and robustness of this generalized control strategy that improves the applicability of the photo-Fenton process by reducing its operating costs and increasing automation
CitationYu, X. [et al.]. Towards an efficient generalization of the online dosage of hydrogen peroxide in photo-fenton process to treat industrial wastewater. "International journal of environmental research and public health", 17 Desembre 2021, vol. 18, núm. 24, p. 13313:1-13313:19.
URIhttp://hdl.handle.net/2117/363371
DOI10.3390/ijerph182413313
ISSN1660-4601
Publisher versionhttps://www.mdpi.com/1660-4601/18/24/13313
Collections
Share: