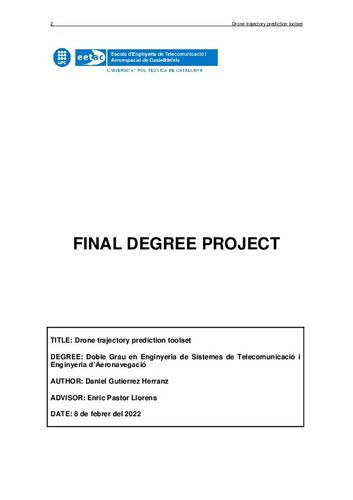 Except where otherwise noted, content on this work is licensed under a Creative Commons license : Attribution-NonCommercial-NoDerivs 3.0 Spain
Abstract
Nowadays, microprocessor and microcontroller technology is evolving very quickly, and this means that drones can have more features at a competitive cost. This has caused drone operations to evolve from purely military purposes to cargo transportation and delivery tasks. As a consequence, the demand for drone permits has been increased exponentially over the last decade and this sudden growth can cause problems in very low-level air traffic management. There are models that explain the behaviour of a drone whose computational cost is very high due to the large number of degrees of freedom that are taken into account. The objective of this project is to design and develop a tool capable of accurately estimate and predict the trajectory of a drone. This study is done from a macroscopic point of view in which factors such as the aerodynamics of the vehicle or its shape are not considered. The first part of the thesis consists of making an exhaustive analysis of the behaviour of the drone in all flight stages of a trajectory. Throughout the development of the thesis, some flight plans have been designed in order for the drone to fly them and thus obtain the telemetry it generates. The last part of the project consists of extracting a mathematical model from the data analysed that is capable of estimating and predicting the performance of a drone given a defined trajectory. The tool has been developed for a specific model of drone but, can be extrapolated to any other. By doing that, it allows this tool to have applications both in air traffic management, at drone air level, and to continuously monitor the performance of a fleet of drones.
SubjectsUAV, Avions no tripulats
DegreeGRAU EN ENGINYERIA DE SISTEMES AEROESPACIALS/GRAU EN ENGINYERIA DE SISTEMES DE TELECOMUNICACIÓ (Pla 2015)
URIhttp://hdl.handle.net/2117/362953
Collections
Share: