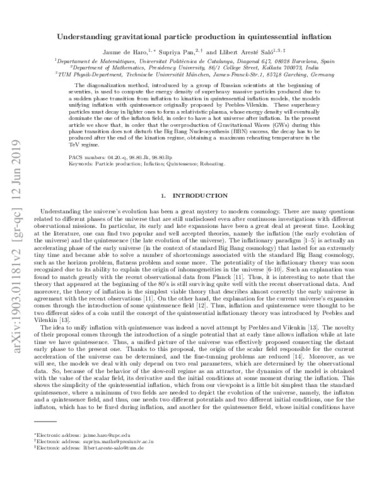 Except where otherwise noted, content on this work is licensed under a Creative Commons license : Attribution-NonCommercial-NoDerivs 3.0 Spain
Abstract
The diagonalization method, introduced by a group of Russian scientists at the beginning of seventies, is used to compute the energy density of superheavy massive particles produced due to a sudden phase transition from inflation to kination in quintessential inflation models, the models unifying inflation with quintessence originally proposed by Peebles-Vilenkin. These superheavy particles must decay in lighter ones to form a relativistic plasma, whose energy density will eventually dominate the one of the inflaton field, in order to have a hot universe after inflation. In the present article we show that, in order that the overproduction of Gravitational Waves (GWs) during this phase transition does not disturb the Big Bang Nucleosynthesis (BBN) success, the decay has to be produced after the end of the kination regime, obtaining a maximum reheating temperature in the TeV regime
CitationHaro, J.; Pan, S.; Aresté, L. Understanding gravitational particle production in quintessential inflation. "Journal of cosmology and astroparticle physics", 1 Juny 2019, vol. 2019, núm. 6, p. 056:1-056:18.
URIhttp://hdl.handle.net/2117/362823
DOI10.1088/1475-7516/2019/06/056
ISSN1475-7516
Publisher versionhttps://iopscience.iop.org/article/10.1088/1475-7516/2019/06/056
Other identifiershttps://arxiv.org/abs/1903.01181
Collections
Share: