Development and characterization of multilayer films based on polyhydroxyalkanoates and hydrocolloids 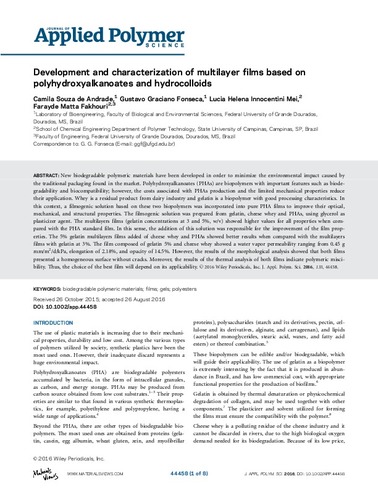 Document typeArticle
PublisherWiley
Rights accessOpen Access
All rights reserved. This work is protected by the corresponding intellectual and industrial property rights. Without prejudice to any existing legal exemptions, reproduction, distribution, public communication or transformation of this work are prohibited without permission of the copyright holder
Abstract
New biodegradable polymeric materials have been developed in order to minimize the environmental impact caused bythe traditional packaging found in the market. Polyhydroxyalkanoates (PHAs) are biopolymers with important features such as biode-gradability and biocompatibility; however, the costs associated with PHAs production and the limited mechanical properties reducetheir application. Whey is a residual product from dairy industry and gelatin is a biopolymer with good processing characteristics. Inthis context, a filmogenic solution based on these two biopolymers was incorporated into pure PHA films to improve their optical,mechanical, and structural properties. The filmogenic solution was prepared from gelatin, cheese whey and PHAs, using glycerol asplasticizer agent. The multilayers films (gelatin concentrations at 3 and 5%, w/v) showed higher values for all properties when com-pared with the PHA standard film. In this sense, the addition of this solution was responsible for the improvement of the film prop-erties. The 5% gelatin multilayers films added of cheese whey and PHAs showed better results when compared with the multilayersfilms with gelatin at 3%. The film composed of gelatin 5% and cheese whey showed a water vapor permeability ranging from 0.45 gmm/m2/d/kPa, elongation of 2.18%, and opacity of 14.5%. However, the results of the morphological analysis showed that both filmspresented a homogeneous surface without cracks. Moreover, the results of the thermal analysis of both films indicate polymeric misci-bility. Thus, the choice of the best film will depend on its applicability
CitationDe Andrade, C.S. [et al.]. Development and characterization of multilayer films based on polyhydroxyalkanoates and hydrocolloids. "Journal of applied polymer science", 7 Novembre 2016, vol. 134, núm. 6, p. 44458:1-44458:8.
URIhttp://hdl.handle.net/2117/362694
DOI10.1002/app.44458
ISSN0021-8995
Publisher versionhttps://onlinelibrary.wiley.com/toc/10974628/2017/134/6
Collections
Share: