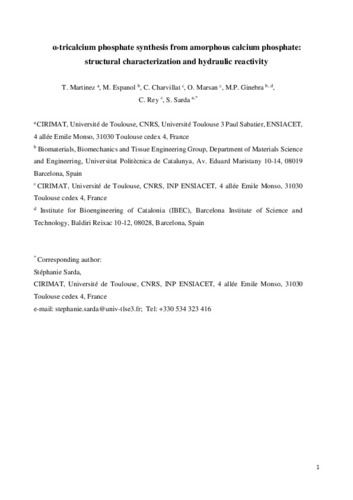 Rey, Christian
Sarda, Stephanie
CovenanteeUniversité de Toulouse; Institut de Bioenginyeria de Catalunya
Document typeArticle
PublisherSpringer
Rights accessOpen Access
Abstract
In the present study, amorphous tricalcium phosphate (TCP) has been synthetized by a wet route to obtain low temperature a-TCP at 650 °C (LT-aTCP) and compare its structural, physical–chemical and thermal properties with those of a-TCP obtained by the conventional solid-state reaction method at 1400 °C (HT-aTCP). Even if no significant differences were observed concerning the values of lattice parameters measured by Rietveld refinement, LT-aTCP presented lower crystallinity and higher crystal strains than HT-aTCP. The reactivity in water of the a-TCP obtained by the two different routes was assessed. Both raw samples appeared relatively inert in solution and did not favour the nucleation of calcium deficient apatite (CDA); the LT-aTCP and HT-aTCP were converted into apatite only after milling. The mechanical process leads to a decrease in crystallinity and the formation of an amorphous phase, which is supported in this work by Raman spectroscopy. The faster rate of conversion of milled LT-aTCP compared to HT-aTCP can be assigned to its higher specific surface area, lower crystallinity and higher residual crystal strain; these favour the dissolution of the a-TCP phase. Finally, the setting properties of a-TCP-based bone cements were compared regarding their synthesis route. Although the synthesis route does not significantly affect the setting times, the kinetic of conversion into CDA was faster for LT-aTCP than for HT-aTCP. Thus, the modulation of the dissolution rate of a-TCP-based cement determined by the preparation route and the grinding process allows control of the overall setting reaction.
CitationMartínez, T. [et al.]. a-tricalcium phosphate synthesis from amorphous calcium phosphate: structural characterization and hydraulic reactivity. "Journal of materials science", 24 Maig 2021, vol. 56, p. 13509-13523.
URIhttp://hdl.handle.net/2117/362556
DOI10.1007/s10853-021-06161-0
ISSN1573-4803
Publisher versionhttps://link.springer.com/article/10.1007%2Fs10853-021-06161-0
Collections
Share: