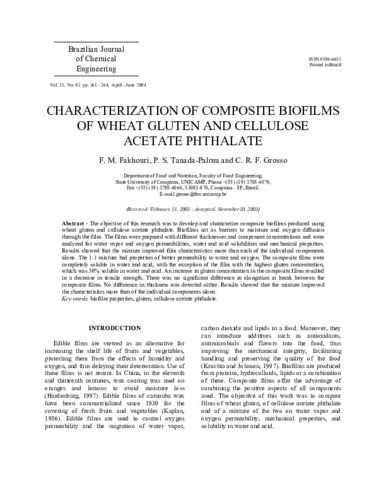 Tanada-Palmu Sayuri, Patricia
Grosso Ferreira, Carlos Raimundo
Document typeArticle
Rights accessOpen Access
Abstract
The objective of this research was to develop and characterize composite biofilms produced using wheat gluten and cellulose acetate phthalate. Biofilms act as barriers to moisture and oxygen diffusion through the film. The films were prepared with different thicknesses and component concentrations and were analyzed for water vapor and oxygen permeabilities, water and acid solubilities and mechanical properties. Results showed that the mixture improved film characteristics more than each of the individual components alone. The 1:1 mixture had properties of better permeability to water and oxygen. The composite films were completely soluble in water and acid, with the exception of the film with the highest gluten concentration, which was 50% soluble in water and acid. An increase in gluten concentration in the composite films resulted in a decrease in tensile strength. There was no significant difference in elongation at break between the composite films. No difference in thickness was detected either. Results showed that the mixture improved the characteristics more than of the individual components alone
CitationMatta, F.; Tanada-Palmu, P.S.; Grosso, C.R.F. Characterization of composite biofilms of wheat gluten and cellulose acetate phthalate. "Brazilian journal of chemical engineering", Juny 2004, vol. 21, núm. 2, p. 261-264.
URIhttp://hdl.handle.net/2117/362492
DOI10.1590/S0104-66322004000200016
ISSN0104-6632
Other identifiershttps://www.scielo.br/j/bjce/a/yqvtQmLwtfmqrSHZs5wNJYQ/?lang=en
Collections
Share: