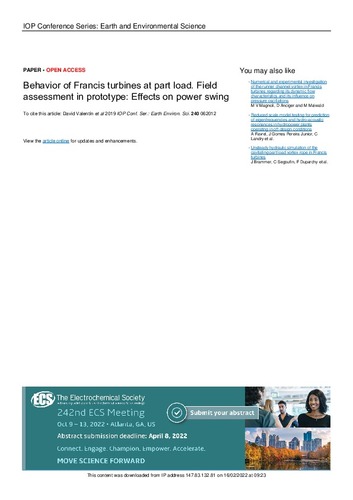 Document typeConference report
PublisherInstitute of Physics (IOP)
Rights accessOpen Access
Abstract
Francis turbines are increasingly demanded to work at part load in order to satisfy the electricity generation demand and to compensate the non-constant generation of other renewable sources such as wind or solar. At part load, Francis turbines present complex flow patterns dominated by cavitation and especially by the draft tube vortex rope. The vortex rope phenomenon affects the structural behavior of the machine as well as the hydraulic circuit response and, for certain conditions, it could become unstable. At this situation, the output power can significantly swing endangering the electrical grid stability. This condition has to be well-known and avoided as far as possible. In this paper, the phenomenon of the power swing at part load in prototypes is studied. For this purpose, different Francis turbine prototypes have been selected. The units have different specific speeds and therefore different power, head and geometry. All of them present the power swing phenomenon at part load. Different sensors, such as accelerometers, proximity probes, pressure sensors or strain gauges, have been placed in different positions of all the machines in order to detect and quantify the phenomenon. The relationship between the hydraulic phenomenon and the output power swing is presented for all the turbines studied. Results obtained permit to asses on the on-site detection of power swing as well as the possibility to avoid it in real-time.
CitationValentin, D. [et al.]. Behavior of Francis turbines at part load. Field assessment in prototype: Effects on power swing. A: 29th IAHR Symposium on Hydraulic Machinery and Systems.. "29th IAHR Symposium on Hydraulic Machinery and Systems". Londres: Institute of Physics (IOP), p. 062012: 1-062012: 8. ISBN 17551307. DOI 10.1088/1755-1315/240/6/062012.
URIhttp://hdl.handle.net/2117/362463
DOI10.1088/1755-1315/240/6/062012
ISBN17551307
Collections
Share: