Detection of erosive cavitation on hydraulic turbines through demodulation analysis 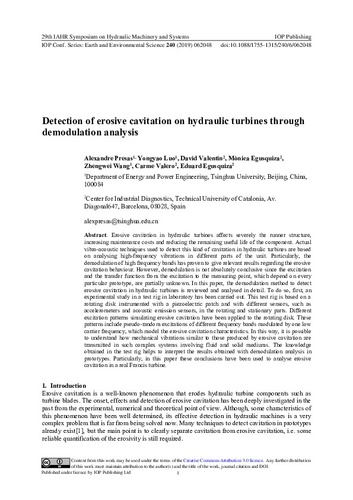 Except where otherwise noted, content on this work is licensed under a Creative Commons license : Attribution-NonCommercial-NoDerivs 3.0 Spain
Abstract
Erosive cavitation in hydraulic turbines affects severely the runner structure, increasing maintenance costs and reducing the remaining useful life of the component. Actual vibro-acoustic techniques used to detect this kind of cavitation in hydraulic turbines are based on analysing high-frequency vibrations in different parts of the unit. Particularly, the demodulation of high frequency bands has proven to give relevant results regarding the erosive cavitation behaviour. However, demodulation is not absolutely conclusive since the excitation and the transfer function from the excitation to the measuring point, which depend on every particular prototype, are partially unknown. In this paper, the demodulation method to detect erosive cavitation in hydraulic turbines is reviewed and analysed in detail. To do so, first, an experimental study in a test rig in laboratory has been carried out. This test rig is based on a rotating disk instrumented with a piezoelectric patch and with different sensors, such as accelerometers and acoustic emission sensors, in the rotating and stationary parts. Different excitation patterns simulating erosive cavitation have been applied to the rotating disk. These patterns include pseudo-random excitations of different frequency bands modulated by one low carrier frequency, which model the erosive cavitation characteristics. In this way, it is possible to understand how mechanical vibrations similar to those produced by erosive cavitation are transmitted in such complex systems involving fluid and solid mediums. The knowledge obtained in the test rig helps to interpret the results obtained with demodulation analysis in prototypes. Particularly, in this paper these conclusions have been used to analyse erosive cavitation in a real Francis turbine.
CitationPresas, A. [et al.]. Detection of erosive cavitation on hydraulic turbines through demodulation analysis. A: 29th IAHR Symposium on Hydraulic Machinery and Systems.. "29th IAHR Symposium on Hydraulic Machinery and Systems". Londres: Institute of Physics (IOP), 2018, p. 062048: 1-062048: 11. ISBN 17551307. DOI 10.1088/1755-1315/240/6/062048.
URIhttp://hdl.handle.net/2117/362415
DOI10.1088/1755-1315/240/6/062048
ISBN17551307
Collections
Share: