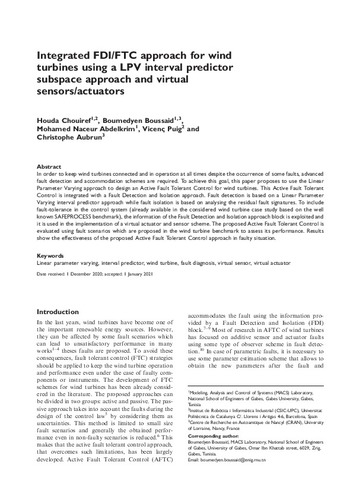 Except where otherwise noted, content on this work is licensed under a Creative Commons license : Attribution-NonCommercial-NoDerivs 3.0 Spain
Abstract
In order to keep wind turbines connected and in operation at all times despite the occurrence of some faults, advanced fault detection and accommodation schemes are required. To achieve this goal, this paper proposes to use the Linear Parameter Varying approach to design an Active Fault Tolerant Control for wind turbines. This Active Fault Tolerant Control is integrated with a Fault Detection and Isolation approach. Fault detection is based on a Linear Parameter Varying interval predictor approach while fault isolation is based on analysing the residual fault signatures. To include fault-tolerance in the control system (already available in the considered wind turbine case study based on the well known SAFEPROCESS benchmark), the information of the Fault Detection and Isolation approach block is exploited and it is used in the implementation of a virtual actuator and sensor scheme. The proposed Active Fault Tolerant Control is evaluated using fault scenarios which are proposed in the wind turbine benchmark to assess its performance. Results show the effectiveness of the proposed Active Fault Tolerant Control approach in faulty situation.
CitationChourief, H. [et al.]. Integrated FDI/FTC approach for wind turbines using a LPV interval predictor subspace approach and virtual sensors/actuators. "Proceedings of the Institution of Mechanical Engineers. Part A, journal of power and energy", 2021, vol. 235, núm. 6, p. 1527-1543.
URIhttp://hdl.handle.net/2117/362324
DOI10.1177/09576509211002080
ISSN0957-6509
Publisher versionhttps://journals.sagepub.com/doi/10.1177/09576509211002080
Collections
Share: