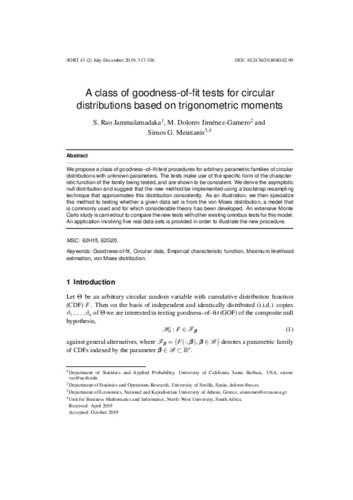 Except where otherwise noted, content on this work is licensed under a Creative Commons license : Attribution-NonCommercial-NoDerivs 3.0 Spain
Abstract
We propose a class of goodness–of–fit test procedures for arbitrary parametric families of circular distributions with unknown parameters. The tests make use of the specific form of the characteristic function of the family being tested, and are shown to be consistent. We derive the asymptotic null distribution and suggest that the new method be implemented using a bootstrap resampling technique that approximates this distribution consistently. As an illustration, we then specialize this method to testing whether a given data set is from the von Mises distribution, a model that is commonly used and for which considerable theory has been developed. An extensive Monte Carlo study is carried out to compare the new tests with other existing omnibus tests for this model. An application involving five real data sets is provided in order to illustrate the new procedure.
CitationRao Jammalamadaka, S.; Jiménez-Gamero, M.D.; Meintanis, S.G. A class of goodness-of-fit tests for circular distributions based on trigonometric moments. "SORT", 17 Desembre 2019, vol. 43, núm. 2, p. 317-336.
URIhttp://hdl.handle.net/2117/362069
ISSN1696-2281
Collections
Share: