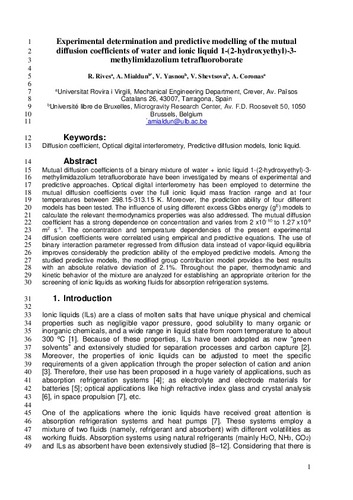 Except where otherwise noted, content on this work is licensed under a Creative Commons license : Attribution-NonCommercial-NoDerivs 3.0 Spain
Abstract
Mutual diffusion coefficients of a binary mixture of water + ionic liquid 1-(2-hydroxyethyl)-3- methylimidazolium tetrafluoroborate have been investigated by means of experimental and predictive ap- proaches. Optical digital interferometry has been employed to determine the mutual diffusion coefficients over the full ionic liquid mass fraction range and at four temperatures between 298.15 and 313.15 K. Moreover, the prediction ability of four different models has been tested. The influence of using different excess Gibbs energy (gE) models to calculate the relevant thermodynamics properties was also addressed. The mutual diffusion coef- ficient has a strong dependence on concentration and varies from 2 × 10-10 to 1.27 × 10-9 m2 s-1. The concen- tration and temperature dependencies of the present experimental diffusion coefficients were correlated using empirical and predictive equations. The use of binary interaction parameter regressed from diffusion data instead of vapor-liquid equilibria improves considerably the prediction ability of the employed predictive models. Among the studied predictive models, the modified group contribution model provides the best results with an absolute relative deviation of 2.1%. Throughout the paper, thermodynamic and kinetic behavior of the mixture are analyzed for establishing an appropriate criterion for the screening of ionic liquids as working fluids for ab- sorption refrigeration systems.
CitationRives, R. [et al.]. Experimental determination and predictive modelling of the mutual diffusion coefficients of water and ionic liquid 1-(2-hydroxyethyl)-3-methylimidazolium tetrafluoroborate. "Journal of molecular liquids", 15 Desembre 2019, vol. 296, p. 111931:1-111931:12.
URIhttp://hdl.handle.net/2117/361976
DOI10.1016/j.molliq.2019.111931
ISSN0167-7322
Publisher versionhttps://www.sciencedirect.com/science/article/abs/pii/S0167732219336347
Collections
Share: