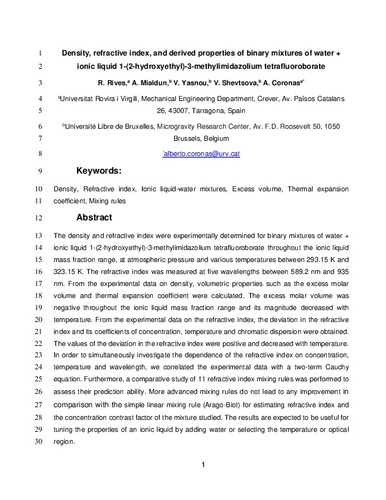 Except where otherwise noted, content on this work is licensed under a Creative Commons license : Attribution-NonCommercial-NoDerivs 3.0 Spain
Abstract
The density and refractive index were experimentally determined for binary mixtures of water + ionic liquid 1-(2-hydroxyethyl)-3-methylimidazolium tetrafluoroborate throughout the ionic liquid mass frac- tion range, at atmospheric pressure and various temperatures between 293.15 K and 323.15 K. The refractive index was measured at five wavelengths between 589.2 nm and 935 nm. From the experimen- tal data on density, volumetric properties such as the excess molar volume and thermal expansion coef- ficient were calculated. The excess molar volume was negative throughout the ionic liquid mass fraction range and its magnitude decreased with temperature. From the experimental data on the refractive index, the deviation in the refractive index and its coefficients of concentration, temperature and chro- matic dispersion were obtained. The values of the deviation in the refractive index were positive and decreased with temperature. In order to simultaneously investigate the dependence of the refractive index on concentration, temperature and wavelength, we correlated the experimental data with a two-term Cauchy equation. Furthermore, a comparative study of 11 refractive index mixing rules was performed to assess their prediction ability. More advanced mixing rules do not lead to any improvement in comparison with the simple linear mixing rule (Arago-Biot) for estimating refractive index and the concentration contrast factor of the mixture studied. The results are expected to be useful for tuning the properties of an ionic liquid by adding water or selecting the temperature or optical region.
CitationRives, R. [et al.]. Density, refractive index, and derived properties of binary mixtures of water + ionic liquid 1-(2-hydroxyethyl)-3-methylimidazolium tetrafluoroborate. "Journal of chemical thermodynamics", Setembre 2021, vol. 160, p. 106484:1-106484:11.
URIhttp://hdl.handle.net/2117/361974
DOI10.1016/j.jct.2021.106484
ISSN0021-9614
Publisher versionhttps://www.sciencedirect.com/science/article/abs/pii/S0021961421000999
Collections
Share: