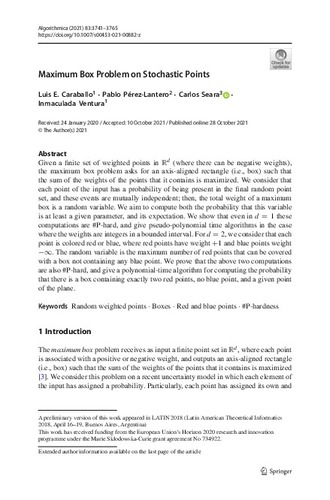 Ventura, Inmaculada
Document typeArticle
PublisherSpringer Nature
Rights accessOpen Access
All rights reserved. This work is protected by the corresponding intellectual and industrial property rights. Without prejudice to any existing legal exemptions, reproduction, distribution, public communication or transformation of this work are prohibited without permission of the copyright holder
ProjectCONNECT - Combinatorics of Networks and Computation (EC-H2020-734922)
Abstract
Given a finite set of weighted points in Rd (where there can be negative weights), the maximum box problem asks for an axis-aligned rectangle (i.e., box) such that the sum of the weights of the points that it contains is maximized. We consider that each point of the input has a probability of being present in the final random point set, and these events are mutually independent; then, the total weight of a maximum box is a random variable. We aim to compute both the probability that this variable is at least a given parameter, and its expectation. We show that even in d=1 these computations are #P-hard, and give pseudo-polynomial time algorithms in the case where the weights are integers in a bounded interval. For d=2, we consider that each point is colored red or blue, where red points have weight +1 and blue points weight -8. The random variable is the maximum number of red points that can be covered with a box not containing any blue point. We prove that the above two computations are also #P-hard, and give a polynomial-time algorithm for computing the probability that there is a box containing exactly two red points, no blue point, and a given point of the plane.
Description
This is a post-peer-review, pre-copyedit version of an article published in Algorithmica. The final authenticated version is available online at: http://dx.doi.org/10.1007/s00453-021-00882-z.
CitationCaraballo, L. [et al.]. Maximum box problem on stochastic points. "Algorithmica", 28 Octubre 2021, vol. 83, p. 3741-3765.
URIhttp://hdl.handle.net/2117/361833
DOI10.1007/s00453-021-00882-z
ISSN1432-0541
Publisher versionhttps://link.springer.com/article/10.1007%2Fs00453-021-00882-z
Collections
Share: