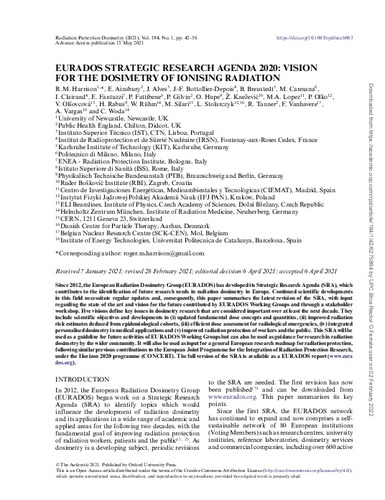 Except where otherwise noted, content on this work is licensed under a Creative Commons license : Attribution 4.0 International
Abstract
Since 2012, the European Radiation Dosimetry Group (EURADOS) has developed its Strategic Research Agenda (SRA), which contributes to the identification of future research needs in radiation dosimetry in Europe. Continued scientific developments in this field necessitate regular updates and, consequently, this paper summarises the latest revision of the SRA, with input regarding the state of the art and vision for the future contributed by EURADOS Working Groups and through a stakeholder workshop. Five visions define key issues in dosimetry research that are considered important over at least the next decade. They include scientific objectives and developments in (i) updated fundamental dose concepts and quantities, (ii) improved radiation risk estimates deduced from epidemiological cohorts, (iii) efficient dose assessment for radiological emergencies, (iv) integrated personalised dosimetry in medical applications and (v) improved radiation protection of workers and the public. This SRA will be used as a guideline for future activities of EURADOS Working Groups but can also be used as guidance for research in radiation dosimetry by the wider community. It will also be used as input for a general European research roadmap for radiation protection, following similar previous contributions to the European Joint Programme for the Integration of Radiation Protection Research, under the Horizon 2020 programme (CONCERT)
CitationVargas, A. [et al.]. EURADOS STRATEGIC RESEARCH AGENDA 2020: VISION FOR THE DOSIMETRY OF IONISING RADIATION. "Radiation protection dosimetry", 31 Maig 2021, vol. 194, núm. 1, p. 42-56.
URIhttp://hdl.handle.net/2117/361721
DOI10.1093/rpd/ncab063
ISSN0144-8420
Publisher versionhttps://academic.oup.com/rpd/article/194/1/42/6275894
Collections
Share: