Orbital eccentricities as indicators of stellar populations: a kinematical analysis of the local disc from GAIA DR2 catalogue 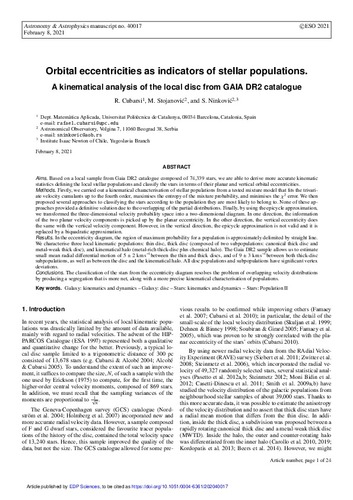 Stojanovic, Milan
Ninkovic, Slobodan
Document typeArticle
PublisherEDP Sciences
Rights accessOpen Access
Abstract
Aims. Based on a local sample from Gaia DR2 catalogue composed of 74 339 stars, we are able to derive more accurate kinematic statistics defining the local stellar populations and classify the stars in terms of their planar and vertical orbital eccentricities. Methods. Firstly, we carried out a kinematical characterisation of stellar populations from a tested mixture model that fits the trivariate velocity cumulants up to the fourth order, maximises the entropy of the mixture probability, and minimises the ¿2 error. We then proposed several approaches to classifying the stars according to the population they are most likely to belong to. None of these approaches provided a definitive solution due to the overlapping of the partial distributions. Finally, by using the epicycle approximation, we transformed the three-dimensional velocity probability space into a two-dimensional diagram. In one direction, the information of the two planar velocity components is picked up by the planar eccentricity. In the other direction, the vertical eccentricity does the same with the vertical velocity component. However, in the vertical direction, the epicycle approximation is not valid and it is replaced by a biquadratic approximation. Results. In the eccentricity diagram, the region of maximum probability for a population is approximately delimited by straight line. We characterise three local kinematic populations: thin disc, thick disc (composed of two subpopulations: canonical thick disc and metal-weak thick disc), and kinematical halo (metal-rich thick-disc plus chemical halo). The Gaia DR2 sample allows us to estimate small mean radial differential motion of 5 ± 2 km s-1 between the thin and thick discs, and of 9 ± 3 km s-1 between both thick-disc subpopulations, as well as between the disc and the kinematical halo. All disc populations and subpopulations have significant vertex deviations. Conclusions. The classification of the stars from the eccentricity diagram resolves the problem of overlapping velocity distributions by producing a segregation that is more net, along with a more precise kinematical characterisation of populations.
CitationCubarsi, R.; Stojanovic, M.; Ninkovic, S. Orbital eccentricities as indicators of stellar populations: a kinematical analysis of the local disc from GAIA DR2 catalogue. "Astronomy and astrophysics", 9 Febrer 2021, vol. 648, p. A48:1-A48:24.
URIhttp://hdl.handle.net/2117/361010
DOI10.1051/0004-6361/202040017
ISSN0004-6361
Publisher versionhttps://www.aanda.org/articles/aa/abs/2021/05/aa40017-20/aa40017-20.html
Collections
Share: