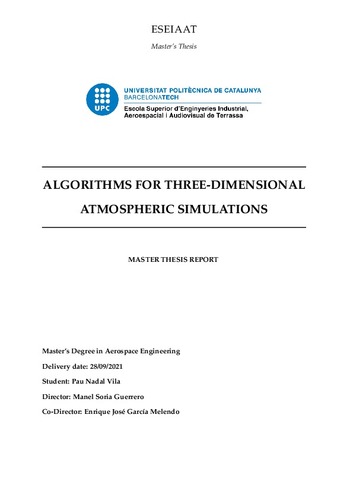 Document typeMaster thesis
Rights accessOpen Access
All rights reserved. This work is protected by the corresponding intellectual and industrial property rights. Without prejudice to any existing legal exemptions, reproduction, distribution, public communication or transformation of this work are prohibited without permission of the copyright holder
Abstract
In this project, an atmospheric model based on the Navier-Stokes equations and the incorpo-ration of the Boussinesq’s approximation is introduced. The model is applicable to pseudo-incompressible adiabatic three-dimensional flows such as the convective movements of plan-etary atmospheres. The semi-explicit direct technique Fractional Step Method (FSM) is then applied to discretize, both in time and in space, the PDE fluid dynamic equations derived from the atmospheric model. Some adequate discretization approaches for the convection and diffusion terms of the equations, including a second-order spectroconsistent scheme and several Total Variation Diminishing (TVD) schemes, are characterized and evaluated. The hyper-viscosity filtering method to avoid spurious oscillations in high-order non-TVD schemes is described. Time integration methods and limitations are also discussed. The Boussinesq ATmospherics (BAT) module of the CFD high performance parallel algorithm (SA3), which implements the discrete evaluation of the atmospheric model equations, is ex-plained. The module was in need of certain modifications in order to be brought to date with the rest of the SA3 algorithm. These changes and other improvements of the code are explained in this document. The module, as well as the implemented changes, are verified twice. First of all, via comparing the produced discrete solutions with analytical ones for a well known CFD case. Then, the Method of Manufactured Solutions (MMS) is applied. After testing and verifying the numerical performance of the algorithm, the 3D Robert Ris-ing Bubble (RRB) benchmark case is simulated using some of the aforementioned convective schemes. This numerical case is designed to represent the vertical convective motion in dry atmospheres. The obtained results indicate the validity of the atmospheric model and the applicability of the different schemes.
SubjectsPlanets--Atmospheres, Mathematical models, Computer simulation, Planetes -- Atmosfera, Models matemàtics, Simulació per ordinador
DegreeMÀSTER UNIVERSITARI EN ENGINYERIA AERONÀUTICA (Pla 2014)
URIhttp://hdl.handle.net/2117/360879
Collections
Share: