Asteroidal volatiles for the development of planetary outposts: the case of the Moon 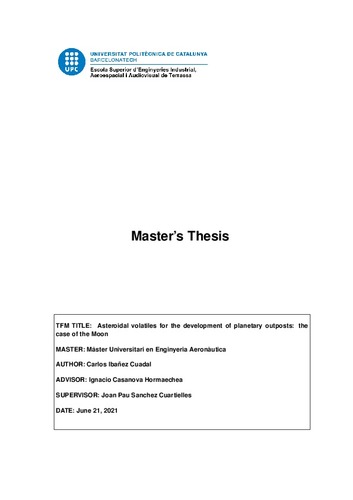 Except where otherwise noted, content on this work is licensed under a Creative Commons license : Attribution 3.0 Spain
Abstract
The discovery of lunar ice in 1998 opened a whole variety of new perspectives for in-situ resource utilization of water on the Moon. However, more recent studies suggest that the amount of lunar ice is scarce. On the other hand, almost every single space agency and a substantial number of private initiatives advocate for a human return to our natural satellite and establishement of a permanent outpost. In this work, a feasibility study of using water from an asteroidal source in lunar orbit will be carried out, including the astrodynamics of asteroid capture and orbital insertion, exploitation approach and a techno-economic analysis of asteroidal water utilization for lunar development. First, selecting and analysing the best candidate asteroid for the mission (asteroid 2010DL). Subsequently, all the technical parameters of the mission will be analysed in order to conclude that due to the current propulsion systems, the impulse times required to accelerate or decelerate the mass of asteroid 2010DL are much longer than the natural flight time that the manoeuvres would have, so it is concluded that with the current propul-sion systems it is not possible to decelerate an asteroid of 19 metres in diameter of type C fast enough on its entry into the Earth’s capture orbit, It then proposes a solution that satisfies both the technical and economic constraints, which is to extract the water directly in the asteroid’s own orbit and send tanks of 9500 litres of water directly from the perigee and apogee of the asteroid’s orbit to a moon distant retrograde orbit.
SubjectsWater, Asteroids, Propulsion systems, Moon, Aigua, Asteroides, Sistemes de propulsió, Lluna
DegreeMÀSTER UNIVERSITARI EN ENGINYERIA AERONÀUTICA (Pla 2014)
URIhttp://hdl.handle.net/2117/360656
Collections
Share: