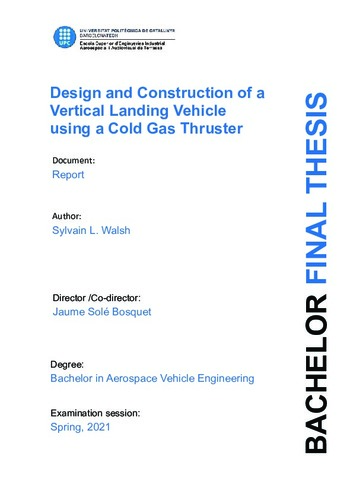 gmail.com
Tutor / directorSolé Bosquet, Jaume
Tipo de documentoTrabajo final de grado
Condiciones de accesoAcceso abierto
Resumen
With the “New Space” era we are now seeing a prominent rise in the development of Reusable Launch Vehicles with vertical landing capabilities. This project aims to design and construct a scaled model of such a vehicle but using a cold gas thruster as a means of propulsion. In order to do so, multiple disciplines of engineering are required to develop critical systems such as retro-propulsion, thrust vector control and aerobraking. From structural simulations and CFD analysis to stabilization algorithms and FDM manufacturing, all the methods employed to carry out this complex task presented their complications and challenges, all of which had to be recorded, analysed and overcome. The propellant chosen for the task of propulsion was compressed air, due to its compatibility and availability. Design requirements were established from the beginning but as the project evolved it was clear several of these could not be realized due to limitations of the components available. Most noticeably, the maximum thrust value was found to be restricted by the propulsion system, which makes it impossible to achieve sufficient deceleration for a controlled landing. Having said that, the project successfully lays down the foundations for future iterations and outlines the next steps required in order to solve the main issues related to thrust. If these issues were to be resolved, there is confidence in coming closer to the project’s aim of using compressed air as a means of propulsion
MateriasRockets (Aeronautics), Space vehicles -- Control systems, PID controllers, Coets (Aeronàutica), Vehicles espacials -- Sistemes de control, Controladors PID
TitulaciónGRAU EN ENGINYERIA EN VEHICLES AEROESPACIALS (Pla 2010)
URIhttp://hdl.handle.net/2117/360505
Colecciones
Comparte: