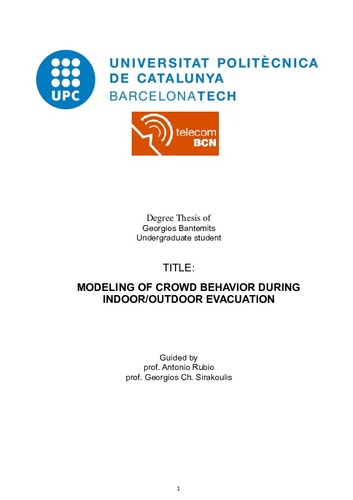 Document typeBachelor thesis
Rights accessOpen Access
Abstract
In pedestrian dynamics, there are forces that usually define the trajectories between the moving individuals. These can be more easily understood in corresponding video scenes where the crowd movement arrives also from the application of such forces like Newton laws as friction and action-reaction. Nevertheless, the complexity of the individuals' movement insinuates that, between them, there are also more complex or "invisible" unknown forces as the ones described by psychological terms that apply and dictate the crowd movement. In this thesis, we want to indicate the existence of those forces by modeling the movement of a human as an oscillation described by rhythms and/or frequencies perceived from its environment. Moreover, we intend to describe with the help of appropriate computational tools and detection and tracking software, the movement of a crowd as a network of rhythms and show that the correlation among the individuals' rhythm can lead to phenomena of synchronization and self-organization of the moving crowd.
SubjectsCrowds, Pedestrians, Modeling languages (Computer science), Multituds, Vianants, Llenguatges de modelat (Informàtica)
DegreeMOBILITAT INCOMING
URIhttp://hdl.handle.net/2117/360431
Collections
Share: