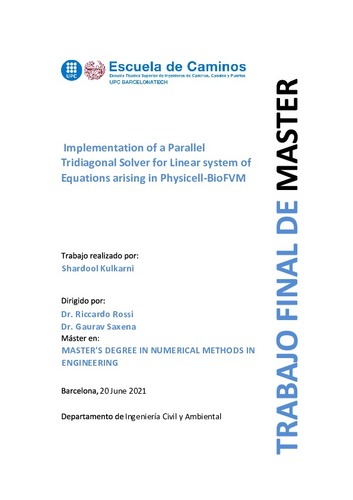 ; Saxena, Gaurav; Ponce de Leon, Miguel
Document typeMaster thesis
Rights accessOpen Access
Abstract
PhysiCell/BioFVM is an opopen-sourcend agent-based software package supporting 2D/3D simulations for multi-cellular biological systems. It is completely written in C++ and enjoys shared-memory parallelization through OpenMP. An attempt is being made to re-structure the code-base to add support for Distributed parallelization through MPI. The biggest bottleneck in the current version of the simulation package is the serial Thomas solver that is used to solve the triadiagonal system of linear equations resulting from the Finite Volume Discretization Method (FVM) of the reaction-diffusion equations modelling the secretion, ingestion of substrates from cells/agents. Our aim in this project is to replace the serial solver with an efficient distributed-parallel solver. For this purpose we experiment with the Cyclic Reduction (CR) algorithm on a shared-memory system but after understanding its limitations with regard to the problem size, we settle on a modified version of the Thomas solver as our preferred choice in distributed-parallel settings. Our experiments show that the Cyclic Reduction algorithm implemented using OpenMP is able to outperform the serial Thomas solver at a certain thread count on a single node. However, we do not extend this algorithm to support distributed parallelism due to the aforementioned problem. Further, we implement an MPI-only version of the modified Thomas algorithm that promises good scalability on multiple nodes of our HPC cluster - the MareNostrum 4 (MN4) supercomputer at the Barcelona Supercomputing Center (BSC). We project and optimistically conclude that for large problem sizes and a high core count, the parallel modified Thomas algorithm can offer significant reduction in the time to solution for complex 3D simulations in PhysiCell/BioFVM.
SubjectsMatrices, Numerical analysis, Matrius (Matemàtica), Anàlisi numèrica
DegreeMÀSTER UNIVERSITARI EN MÈTODES NUMÈRICS EN ENGINYERIA (Pla 2012)
URIhttp://hdl.handle.net/2117/360430
Collections
Share: