Tools for numerical simulation of electrical coronas in aircraft. Research on artificial electrical charging of aircraft and ion seeding 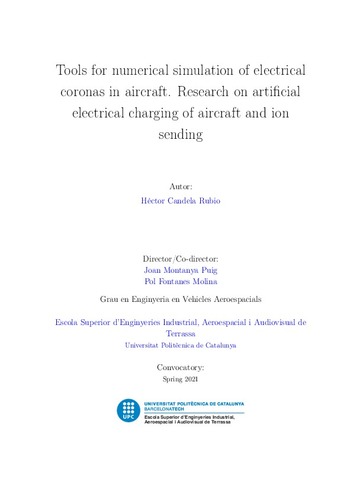 Except where otherwise noted, content on this work is licensed under a Creative Commons license : Attribution-NonCommercial 3.0 Spain
Abstract
When aircraft go through a high electric field zone, sometimes can trigger lightning, that when strike the aircraft produces damage on the structure or indirect damage on the communications and electronics of the aircraft, due to the high current and electric field of the lightning. Because of the introduction of composite materials on the structure that are bad electric conductors and the use of more electronics on the control and communications system of the aircraft, the danger of severe damages on the aircraft increases. This danger originates the necessity for the development of lightning protection systems for aircraft. The Lightning Research Group (UPC) and the Aeroastro (MIT) are studying and developing a system to electrically charge the aircraft using the corona effect produced on an isolated electrode near the trailing edge of the airfoil. Charging the aircraft in the same polarity as the cloud delays the discharge of the lightning, in consequence protecting it. This system also has other potential applications, as sending ions from the electrode to the atmosphere with the goal of charge it or discharge it, or discharge an aircraft that has been naturally charged during the flight to avoid undesired discharges during the landing. To comprehend better this phenomenon it is important to study it and generate models to simulate it. So in this work, a numerical method has been developed to recreate the corona effect on the electrode, the ions drift velocity around the airfoil, and how the wing-electrode system charges over time. The results obtained are that corona effects appear in the region near the electrode and the size of this area is a function of the potential applied, the altitude, and the charge of the wing. Also, the positive ions are repelled by the electrode and attracted by the wing, but some of them are pulled away by the wind, meanwhile, the negative ions and electrons are attracted by the electrode charging the system negatively. This work concludes that this model is not representative for simulating all the transitory part of charging the wing, mainly because of the computational cost that it has to do it with the necessary precision. But is a good advance of the modeling of the corona effect and with better optimization and more computational power can be useful
SubjectsAirplanes, Airplanes -- Electric equipment, Electrostatics, Avions, Avions -- Equip elèctric, Electroestàtica
DegreeGRAU EN ENGINYERIA EN VEHICLES AEROESPACIALS (Pla 2010)
URIhttp://hdl.handle.net/2117/360409
Collections
Share: