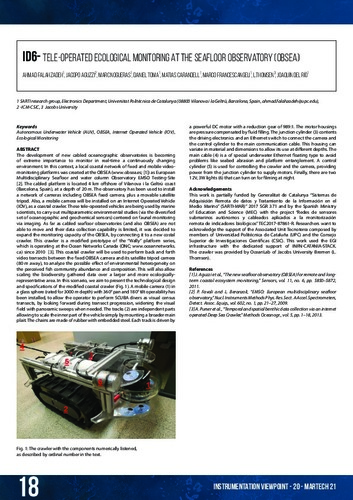 Except where otherwise noted, content on this work is licensed under a Creative Commons license : Attribution-NonCommercial-NoDerivs 3.0 Spain
Abstract
The development of new cabled oceanographic observatories is becoming of extreme importance to monitor in real-time a continuously changing environment. In this context, a local coastal network of fxed and mobile videomonitoring platforms was created at the OBSEA (www.obsea.es; [1]) as European Multidisciplinary Seafoor and water column Observatory EMSO Testing-Site [2]. The cabled platform is located 4 km ofshore of Vilanova i la Geltrú coast (Barcelona, Spain), at a depth of 20 m. The observatory has been used to install a network of cameras including OBSEA fxed camera, plus a movable satellite tripod. Also, a mobile camera will be installed on an Internet Operated Vehicle (IOV), as a coastal crawler. These tele-operated vehicles are being used by marine scientists, to carry out multiparametric environmental studies (via the diversifed set of oceanographic and geochemical sensors) centered on faunal monitoring via imaging. As far as cabled seafoor observatories (and also OBSEA) are not able to move and their data collection capability is limited, it was decided to expand the monitoring capacity of the OBSEA, by connecting it to a new costal crawler. This crawler is a modifed prototype of the “Wally” platform series, which is operating at the Ocean Networks Canada (ONC; www.oceannetworks. ca) since 2010 [3]. This coastal crawler will be used to perform back and forth video transects between the fxed OBSEA camera and its satellite tripod camera (80 m away), to analyze the possible efect of environmental heterogeneity on the perceived fsh community abundance and composition. This will also allow scaling the biodiversity gathered data over a larger and more ecologicallyrepresentative area. In this scenario, we aim to present the technological design and specifcations of the modifed coastal crawler (Fig. 1). A mobile camera (1) in a glass sphere (rated for 3000 m depth) with 360° pan and 180° tilt operability has been installed, to allow the operator to perform SCUBA divers as visual census transects, by looking forward during transect progression, widening the visual feld with panoramic sweeps when needed. The tracks (2) are independent parts allowing to scale the inner part of the vehicle simply by mounting a broader main plait. The chains are made of rubber with embedded steel. Each track is driven by a powerful DC motor with a reduction gear of 989:1. The motor housings are pressure compensated by fuid flling. The junction cylinder (3) contents the driving electronics and an Ethernet switch to connect the camera and the control cylinder to the main communication cable. This housing can variate in material and dimensions to allow its use at diferent depths. The main cable (4) is a of special underwater Ethernet foating type to avoid problems like seabed abrasion and platform entanglement. A control cylinder (5) is used for controlling the crawler and the camera, providing power from the junction cylinder to supply motors. Finally, there are two 12V, 3W lights (6) that can turn on for flming at night.
CitationFalahzadeh, A. [et al.]. Tele-operated ecological monitoring at the seafloor observatory (OBSEA). 9th International Workshop on Marine Technology (MARTECH 2021)". ""Instrumentation Viewpoint", 2021, núm. 21, p. 18.
URIhttp://hdl.handle.net/2117/360391
DLB.32814-2006
ISSN1886-4864
Collections
Share: