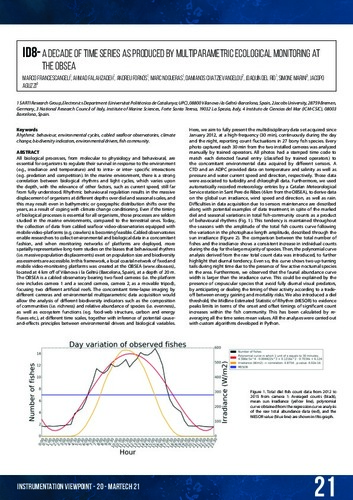 Except where otherwise noted, content on this work is licensed under a Creative Commons license : Attribution-NonCommercial-NoDerivs 3.0 Spain
Abstract
All biological processes, from molecular to physiology and behavioural, are essential for organisms to regulate their survival in response to the environment (e.g., irradiance and temperature) and to intra- or inter- specifc interactions (e.g. predation and competition). In the marine environment, there is a strong correlation between biological rhythms and light cycles, which varies upon the depth, with the relevance of other factors, such as current speed, still far from fully understood. Rhythmic behavioural regulation results in the massive displacement of organisms at diferent depths over diel and seasonal scales, and this may result even in bathymetric or geographic distribution shifts over the years, as a result of coping with climate change conditioning. Even if the timing of biological processes is essential for all organisms, those processes are seldom studied in the marine environments, compared to the terrestrial ones. Today, the collection of data from cabled seafoor video-observatories equipped with mobile video-platforms (e.g. crawlers) is becoming feasible. Cabled observatories enable researchers to collect environmental and biological data in a concomitant fashion, and when monitoring networks of platforms are deployed, more spatially representative long-term studies on the biases that behavioural rhythms (i.e. massive population displacements) exert on population size and biodiversity assessments are accessible. In this framework, a local coastal network of fxed and mobile video-monitoring platforms was created at the OBSEA (www.obsea.es), located at 4 km of of Vilanova i la Geltrú (Barcelona, Spain), at a depth of 20 m. The OBSEA is a cabled observatory bearing two fxed cameras (i.e. the platform one includes camera 1 and a second camera, camera 2, as a movable tripod), focusing two diferent artifcial reefs. The concomitant time-lapse imaging by diferent cameras and environmental multiparametric data acquisition would allow the analysis of diferent biodiversity indicators such as the composition of communities (i.e. richness) and relative abundance of species (i.e. evenness), as well as ecosystem functions (e.g. food-web structure, carbon and energy fuxes etc.), at diferent time scales, together with inference of potential causeand-efects principles between environmental drivers and biological variables. Here, we aim to fully present the multidisciplinary data set acquired since January 2012, at a high-frequency (30 min), continuously during the day and the night, reporting count fuctuations in 27 bony fsh species. Every photo captured each 30 min from the two installed cameras was analyzed manually by trained operators. All photos had a stamped time code to match each detected faunal entry (classifed by trained operators) to the concomitant environmental data acquired by diferent sensors. A CTD and an ADPC provided data on temperature and salinity as well as pressure and water current speed and direction, respectively. Those data were associated to turbidity and chlorophyll data. Furthermore, we used automatically recorded meteorology entries by a Catalan Meteorological Service station in Sant Pere de Ribes (6 km from the OBSEA), to derive data on the global sun irradiance, wind speed and direction, as well as rain. Difculties in data acquisition due to sensors maintenance are described along with potential examples of data treatment, in spite of the marked diel and seasonal variations in total fsh-community counts as a product of behavioural rhythms (Fig. 1). This tendency is maintained throughout the seasons with the amplitude of the total fsh counts curve following the variation in the photophase length amplitude, described through the sun irradiance (Figure 2). The comparison between the total number of fshes and the irradiance shows a consistent increase in individual counts during the day for the large majority of species. Then, the polynomial curve analysis derived from the raw total count data was introduced, to further highlight that diurnal tendency. Even so, this curve shows two up-turning tails during night time due to the presence of few active nocturnal species in the area. Furthermore, we observed that the faunal abundance curve width is larger than the irradiance curve. This could be explained by the presence of crepuscular species that avoid fully diurnal visual predators, by anticipating or dealing the timing of their activity according to a tradeof between energy gaining and mortality risks. We also introduced a diel threshold, the Midline Estimated Statistic of Rhythm (MESOR) to evidence peaks limits in terms of the onset and ofset timings of signifcant count increases within the fsh community. This has been calculated by reaveraging all the time series mean values. All the analyses were carried out with custom algorithms developed in Python.
CitationFrancescangeli, M. [et al.]. A decade of time series as produced by multiparametric ecological monitoring at the OBSEA. 9th International Workshop on Marine Technology (MARTECH 2021)". ""Instrumentation Viewpoint", 2021, núm. 21, p. 21-22.
URIhttp://hdl.handle.net/2117/360379
DLB.32814-2006
ISSN1886-4864
Collections
Share: