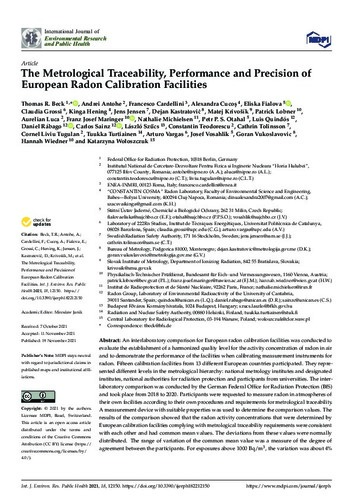 Document typeArticle
Rights accessOpen Access
Abstract
An interlaboratory comparison for European radon calibration facilities was conducted to evaluate the establishment of a harmonized quality level for the activity concentration of radon in air and to demonstrate the performance of the facilities when calibrating measurement instruments for radon. Fifteen calibration facilities from 13 different European countries participated. They represented different levels in the metrological hierarchy: national metrology institutes and designated institutes, national authorities for radiation protection and participants from universities. The interlaboratory comparison was conducted by the German Federal Office for Radiation Protection (BfS) and took place from 2018 to 2020. Participants were requested to measure radon in atmospheres of their own facilities according to their own procedures and requirements for metrological traceability. A measurement device with suitable properties was used to determine the comparison values. The results of the comparison showed that the radon activity concentrations that were determined by European calibration facilities complying with metrological traceability requirements were consistent with each other and had common mean values. The deviations from these values were normally distributed. The range of variation of the common mean value was a measure of the degree of agreement between the participants. For exposures above 1000 Bq/m3, the variation was about 4% for a level of confidence of approximately 95% (k=2). For lower exposure levels, the variation increased to about 6%.
CitationBeck, T. [et al.]. The metrological traceability, performance and precision of european radon calibration facilities. "International journal of environmental research and public health", 19 Novembre 2021, vol. 18, núm. 22, p. 12150:1-12150:15.
URIhttp://hdl.handle.net/2117/360104
DOI10.3390/ijerph182212150
ISSN1660-4601
Publisher versionhttps://www.mdpi.com/1660-4601/18/22/12150/htm
Collections
Share: