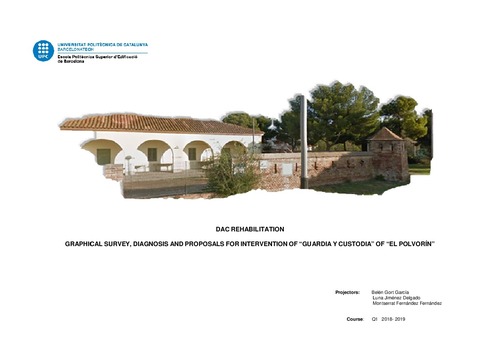 Except where otherwise noted, content on this work is licensed under a Creative Commons license : Attribution-NonCommercial-NoDerivs 3.0 Spain
Abstract
This project, carried out for the subject of the DAC of Rehabilitation, is based on one of the two military buildings that are in the foothills of Montjuic, in the district of “El Polvorín”, now, part of the “Marina del Port”. In this building resided the guard that guarded the warehouse where the gunpowder was stored to supply the arms of the Castle of Montjuic. Through it a tour of history, environment and the whole is made to understand the meaning and importance of the building. In this study a description is made as detailed as possible to understand how it was built and its deterioration over the years. And it is helped by means of photographs, graphs and drawings to be able to visualize it. The process carried out for the graphic survey is detailed, explaining which information sources have been consulted, which tools have been used for the measurement and finally the plans derived from all this work have been included. The project will consist of different sections. In them we will describe the building in its current state, locating all those injuries as well as detecting all those points for which the current legal regulations are not being met. In the second section, the necessary proposals will be made to solve the localized injuries as well as for the building to comply with the stipulations of the Technical Building Code. Likewise, the realization of some functional and / or aesthetic improvements will be studied to make the building more useful. With the improvements in communication, and the inauguration this September, of two new subway stations in this neighborhood, access to the building, almost unknown in Barcelona, has been facilitated in this way the search for information and data collection It has been easier. This project has been carried out between the months of September 2018 and December 2019.
URIhttp://hdl.handle.net/2117/359965
Collections
Share: