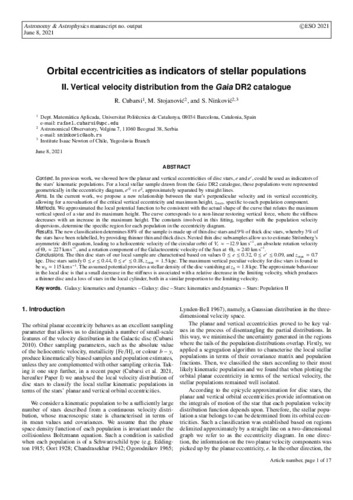 Stojanovic, Milan
Ninkovic, Slobodan
Document typeArticle
PublisherEDP Sciences
Rights accessOpen Access
Abstract
Context. In previous work, we showed how the planar and vertical eccentricities of disc stars, e and e' , could be used as indicators of the stars’ kinematic populations. For a local stellar sample drawn from the Gaia DR2 catalogue, these populations were represented geometrically in the eccentricity diagram, e'² vs e² , approximately separated by straight lines. Aims. In the current work, we propose a new relationship between the star’s perpendicular velocity and its vertical eccentricity, allowing for a reevaluation of the critical vertical eccentricity and maximum height, z_max, specific to each population component. Methods. We approximated the local potential function to be consistent with the actual shape of the curve that relates the maximum vertical speed of a star and its maximum height. The curve corresponds to a non-linear restoring vertical force, where the stiffness decreases with an increase in the maximum height. The constants involved in this fitting, together with the population velocity dispersions, determine the specific region for each population in the eccentricity diagram. Results. The new classification determines 88% of the sample is made up of thin disc stars and 9% of thick disc stars, whereby 3% of the stars have been relabelled, by providing thinner thin and thick discs. Nested thin disc subsamples allow us to estimate Strömberg’s asymmetric drift equation, leading to a heliocentric velocity of the circular orbit of V_c ˜ -12.9 km s -1 , an absolute rotation velocity of T_c ˜ 227 km s -1 , and a rotation component of the Galactocentric velocity of the Sun at T_¿ ˜ 240 km s -1 . Conclusions. The thin disc stars of our local sample are characterised based on values 0 = e = 0.32, 0 = e' = 0.09, and z_max = 0.7 kpc. Disc stars satisfy 0 = e = 0.44, 0 = e' = 0.18, z_max = 1.5 kpc. The maximum vertical peculiar velocity for disc stars is found to be w_0 = 115 km s -1 . The assumed potential provides a stellar density of the disc vanishing at z_0 = 1.8 kpc. The approximate behaviour in the local disc is that a small decrease in the stiffness is associated with a relative decrease in the limiting velocity, which produces a thinner disc and a loss of stars in the local cylinder, both in a similar proportion to the limiting velocity.
CitationCubarsi, R.; Stojanovic, M.; Ninkovic, S. Orbital eccentricities as indicators of stellar populations. II. Vertical velocity distribution from the Gaia DR2 catalogue. "Astronomy and astrophysics", Agost 2021, vol. 652, p. A58:1-A58:17.
URIhttp://hdl.handle.net/2117/359890
DOI10.1051/0004-6361/202140835
ISSN0004-6361
Publisher versionhttps://www.aanda.org/articles/aa/pdf/forth/aa40835-21.pdf
Collections
Share: