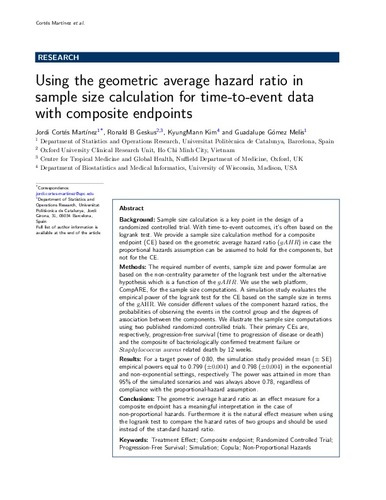 Tipo de documentoArtículo
Condiciones de accesoAcceso abierto
Resumen
Background: Sample size calculation is a key point in the design of a randomized controlled trial. With time-to-event outcomes, it’s often based on the logrank test. We provide a sample size calculation method for a composite endpoint (CE) based on the geometric average hazard ratio (gAHR) in case the proportional hazards assumption can be assumed to hold for the components, but not for the CE. Methods: The required number of events, sample size and power formulae are based on the non-centrality parameter of the logrank test under the alternative hypothesis which is a function of the gAHR. We use the web platform, CompARE, for the sample size computations. A simulation study evaluates the empirical power of the logrank test for the CE based on the sample size in terms of the gAHR. We consider different values of the component hazard ratios, the probabilities of observing the events in the control group and the degrees of association between the components. We illustrate the sample size computations using two published randomized controlled trials. Their primary CEs are, respectively, progression-free survival (time to progression of disease or death) and the composite of bacteriologically confirmed treatment failure or Staphylococcus aureus related death by 12 weeks. Results: For a target power of 0.80, the simulation study provided mean (± SE) empirical powers equal to 0.799 (±0.004) and 0.798 (±0.004) in the exponential and non-exponential settings, respectively. The power was attained in more than 95% of the simulated scenarios and was always above 0.78, regardless of compliance with the proportional-hazard assumption. Conclusions: The geometric average hazard ratio as an effect measure for a composite endpoint has a meaningful interpretation in the case of non-proportional hazards. Furthermore it is the natural effect measure when using the logrank test to compare the hazard rates of two groups and should be used instead of the standard hazard ratio.
CitaciónCortes, J. [et al.]. Using the geometric average hazard ratio in sample size calculation for time-to-event data with composite endpoints. "BMC medical research methodology", 6 Maig 2021, vol. 21, p. 99:1-99:14.
URIhttp://hdl.handle.net/2117/359874
DOI10.1186/s12874-021-01286-x
ISSN1471-2288
Versión del editorhttps://bmcmedresmethodol.biomedcentral.com/articles/10.1186/s12874-021-01286-x
Colecciones
Comparte: