The role of universities on the consolidation of knowledge-based sectors: A spatial econometric analysis of KIBS formation rates in Spanish regions 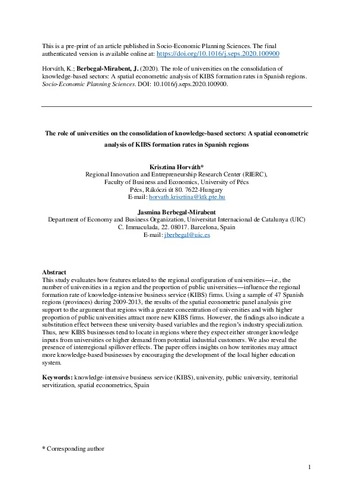 Except where otherwise noted, content on this work is licensed under a Creative Commons license : Attribution-NonCommercial-NoDerivs 4.0 International
Abstract
This study evaluates how features related to the regional configuration of universities—i.e., the number of universities in a region and the proportion of public universities—influence the regional formation rate of knowledge-intensive business service (KIBS) firms. Using a sample of 47 Spanish regions (provinces) during 2009–2013, the results of the spatial econometric panel analysis give support to the argument that regions with a greater concentration of universities and with higher proportion of public universities attract more new KIBS firms. However, the findings also indicate a substitution effect between these university-based variables and the region's industry specialization. Thus, new KIBS businesses tend to locate in regions where they expect either stronger knowledge inputs from universities or higher demand from potential industrial customers. We also reveal the presence of interregional spillover effects. The paper offers insights on how territories may attract more knowledge-based businesses by encouraging the development of the local higher education system.
CitationHorváth, K.; Berbegal-Mirabent, J. The role of universities on the consolidation of knowledge-based sectors: A spatial econometric analysis of KIBS formation rates in Spanish regions. "Socio-economic planning sciences", 2020,
URIhttp://hdl.handle.net/2117/359535
DOI10.1016/j.seps.2020.100900
ISSN0038-0121
Publisher versionhttps://www.sciencedirect.com/science/article/pii/S0038012119306378
Collections
Share: