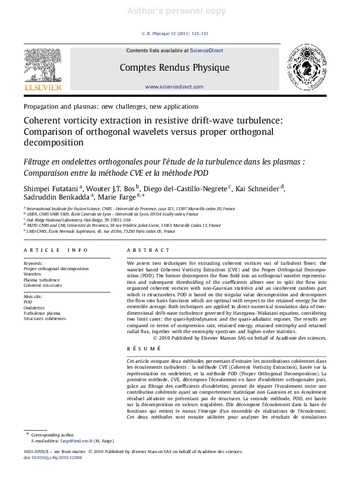 Except where otherwise noted, content on this work is licensed under a Creative Commons license : Attribution-NonCommercial-NoDerivs 3.0 Spain
Abstract
We assess two techniques for extracting coherent vortices out of turbulent flows: the wavelet based Coherent Vorticity Extraction (CVE) and the Proper Orthogonal Decomposition (POD). The former decomposes the flow field into an orthogonal wavelet representation and subsequent thresholding of the coefficients allows one to split the flow into organized coherent vortices with non-Gaussian statistics and an incoherent random part which is structureless. POD is based on the singular value decomposition and decomposes the flow into basis functions which are optimal with respect to the retained energy for the ensemble average. Both techniques are applied to direct numerical simulation data of two-dimensional drift-wave turbulence governed by Hasegawa–Wakatani equation, considering two limit cases: the quasi-hydrodynamic and the quasi-adiabatic regimes. The results are compared in terms of compression rate, retained energy, retained enstrophy and retained radial flux, together with the enstrophy spectrum and higher order statistics.
CitationFutatani, S. [et al.]. Coherent vorticity extraction in resistive drift-wave turbulence: Comparison of orthogonal wavelets versus proper orthogonal decomposition. "Comptes rendus physique", Març 2011, vol. 12, núm. 2, p. 123-131.
URIhttp://hdl.handle.net/2117/359283
DOI10.1016/j.crhy.2010.12.004
ISSN1631-0705
Publisher versionhttps://www.sciencedirect.com/science/article/pii/S1631070510001672
Collections
Share: