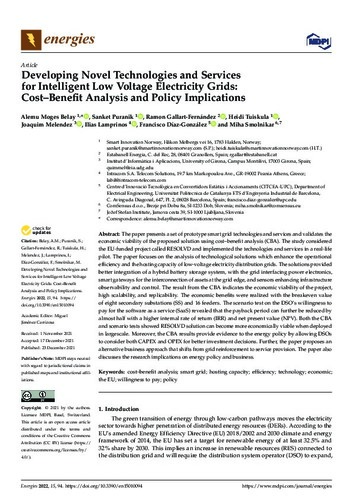 Smolnikar, Miha
Document typeArticle
Rights accessOpen Access
ProjectRESOLVD - Renewable penetration levered by Efficient Low Voltage Distribution grids (EC-H2020-773715)
Abstract
The paper presents a set of prototype smart grid technologies and services and validates the economic viability of the proposed solution using cost–benefit analysis (CBA). The study considered the EU-funded project called RESOLVD and implemented the technologies and services in a real-life pilot. the technologies and services on the EU-funded H2020. The paper focuses on the analysis of technological solutions which enhance the operational efficiency and the hosting capacity of low-voltage electricity distribution grids. The solutions provided better integration of a hybrid battery storage system, with the grid interfacing power electronics, smart gateways for the interconnection of assets at the grid edge, and sensors enhancing infrastructure observability and control. The result from the CBA indicates the economic viability of the project, high scalability, and replicability. The economic benefits were realized with the breakeven value of eight secondary substations (SS) and 16 feeders. The scenario test on the DSO’s willingness to pay for the software as a service (SaaS) revealed that the payback period can further be reduced by almost half with a higher internal rate of return (IRR) and net present value (NPV). Both the CBA and scenario tests showed RESOLVD solution can become more economically viable when deployed in largescale. Moreover, the CBA results provide evidence to the energy policy by allowing DSOs to consider both CAPEX and OPEX for better investment decisions. Further, the paper proposes an alternative business approach that shifts from grid reinforcement to service provision. The paper also discusses the research implications on energy policy and business.
CitationBelay, A. [et al.]. Developing novel technologies and services for intelligent low voltage electricity grids: cost–benefit analysis and policy implications. "Energies", 23 Desembre 2021, vol. 15, núm. 1, p. 94:1-94:25.
URIhttp://hdl.handle.net/2117/359215
DOI10.3390/en15010094
ISSN1996-1073
Publisher versionhttps://www.mdpi.com/1996-1073/15/1/94
Collections
Share: