Design of a Hybrid Lunar-fueled Rocket 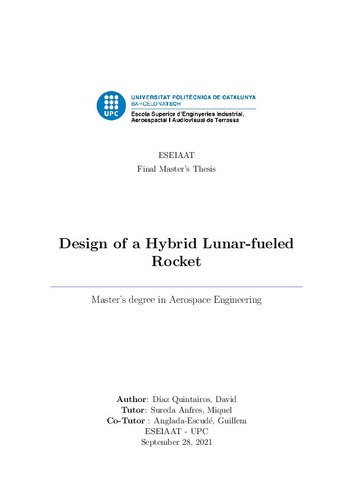 ; Anglada-Escudé, Guillem
Document typeMaster thesis
Rights accessOpen Access
All rights reserved. This work is protected by the corresponding intellectual and industrial property rights. Without prejudice to any existing legal exemptions, reproduction, distribution, public communication or transformation of this work are prohibited without permission of the copyright holder
Abstract
Today, our calling to explore the universe is even greater than fifty years ago, this calls out for a new design in our propulsion systems in order to achieve a sustainable, reusable and Earth-conditions independent. Sixty years ago, the worldwide known as the space race started. The first step on the Moon by a Homo Sapiens Sapiens was the end point on that race and unfortunately the end of the interest in the conquest of space and space exploration, until now. Humankind finds thyself again in the verge of a new space race, now to make ourselves multi-planetary species, setting foot on Mars in the next decade. So far, the journey has been challenging and full of technology advancements, however, in order to avoid another half century of human space inactivity rather than the ISS, new advancements need to be done. The urge to re-conquer the Moon and settle there a human base will be key for the global economy of the country that achieves that goal and will be the beginning of a new space era. In the next decades, the rise of interest in the cosmic bodies that surround Earth will be exponential due to the resources those provide and the constant quenching of Earth resources; thus, the era of cosmic bodies exploitation of materials and human settlements will start if not already started. The figure below shows the known space missions along the decades and it can be observed the continuous increment of missions along the years and it will keep increasing in the following decades. However, in order to let this new space episode start, the most pressing needs of the old space episode need to be tackled. That is why, throughout this master’s thesis, it is aimed to achieve a first approach on the future of in-situ resources utilization propulsion systems, with the final goal of designing and testing a functional propulsion system that would match the requirements settled; paving the way to a thorough research on alternative rockets independent from the resources of Earth and leading to a brighter and more efficient space exploration future.
SubjectsPropulsion systems, Rockets (Aeronautics), Sistemes de propulsió, Coets (Aeronàutica)
DegreeMÀSTER UNIVERSITARI EN ENGINYERIA AERONÀUTICA (Pla 2014)
URIhttp://hdl.handle.net/2117/358834
Collections
Share: