The impact of animations in the perception of a simulated crowd 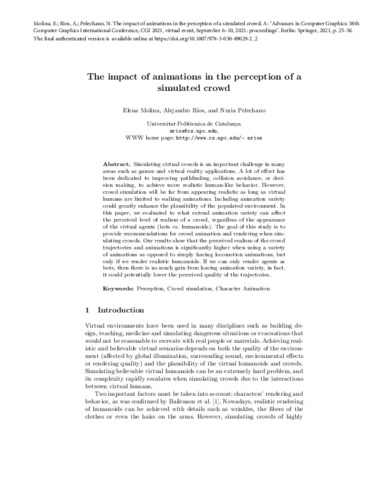 Document typePart of book or chapter of book
PublisherSpringer
Rights accessOpen Access
All rights reserved. This work is protected by the corresponding intellectual and industrial property rights. Without prejudice to any existing legal exemptions, reproduction, distribution, public communication or transformation of this work are prohibited without permission of the copyright holder
Abstract
Simulating virtual crowds is an important challenge in many areas such as games and virtual reality applications. A lot of effort has been dedicated to improving pathfinding, collision avoidance, or decision making, to achieve more realistic human-like behavior. However, crowd simulation will be far from appearing realistic as long as virtual humans are limited to walking animations. Including animation variety could greatly enhance the plausibility of the populated environment. In this paper, we evaluated to what extend animation variety can affect the perceived level of realism of a crowd, regardless of the appearance of the virtual agents (bots vs. humanoids). The goal of this study is to provide recommendations for crowd animation and rendering when simulating crowds. Our results show that the perceived realism of the crowd trajectories and animations is significantly higher when using a variety of animations as opposed to simply having locomotion animations, but only if we render realistic humanoids. If we can only render agents as bots, then there is no much gain from having animation variety, in fact, it could potentially lower the perceived quality of the trajectories.
CitationMolina, E.; Rios, A.; Pelechano, N. The impact of animations in the perception of a simulated crowd. A: "Advances in Computer Graphics: 38th Computer Graphics International Conference, CGI 2021, virtual event, September 6–10, 2021: proceedings". Berlín: Springer, 2021, p. 25-38.
URIhttp://hdl.handle.net/2117/358646
DOI10.1007/978-3-030-89029-2_2
ISBN978-3-030-89029-2
Publisher versionhttps://link.springer.com/book/10.1007/978-3-030-89029-2
Collections
Share: