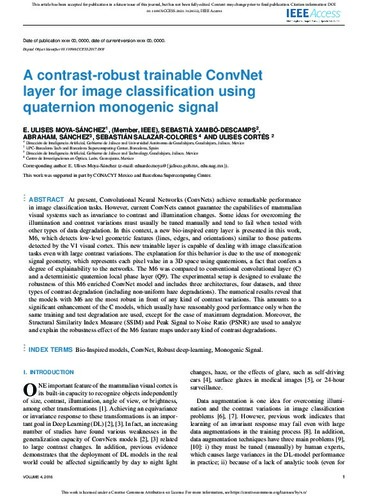 Except where otherwise noted, content on this work is licensed under a Creative Commons license : Attribution 4.0 International
Abstract
Convolutional Neural Networks (ConvNets) at present achieve remarkable performance in image classification tasks. However, current ConvNets cannot guarantee the capabilities of the mammalian visual systems such as invariance to contrast and illumination changes. Some ideas to overcome the illumination and contrast variations usually have to be tuned manually and tend to fail when tested with other types of data degradation. In this context, we present a new bio-inspired entry layer, M6, which detects low-level geometric features (lines, edges, and orientations) which are similar to patterns detected by the V1 visual cortex. This new trainable layer is capable of coping with image classification even with large contrast variations. The explanation for this behavior is the monogenic signal geometry, which represents each pixel value in a 3D space using quaternions, a fact that confers a degree of explainability to the networks. We compare M6 with a conventional convolutional layer (C) and a deterministic quaternion local phase layer (Q9). The experimental setup is designed to evaluate the robustness of our M6 enriched ConvNet model and includes three architectures, four datasets, three types of contrast degradation (including non-uniform haze degradations). The numerical results reveal that the models with M6 are the most robust in front of any kind of contrast variations. This amounts to a significant enhancement of the C models, which usually have reasonably good performance only when the same training and test degradation are used, except for the case of maximum degradation. Moreover, the Structural Similarity Index Measure (SSIM) is used to analyze and explain the robustness effect of the M6 feature maps under any kind of contrast degradations.
CitationMoya, E. [et al.]. A trainable monogenic ConvNet layer robust in front of large contrast changes in image classification. "IEEE access", 20 Desembre 2021, vol. 9, p. 163735 - 163746.
URIhttp://hdl.handle.net/2117/357954
DOI10.1109/ACCESS.2021.3128552
ISSN2169-3536
Publisher versionhttps://ieeexplore.ieee.org/document/9615499
Collections
Share: