The potential of numerical prediction systems to support the design of Arctic observing systems: Insights from the APPLICATE and YOPP projects 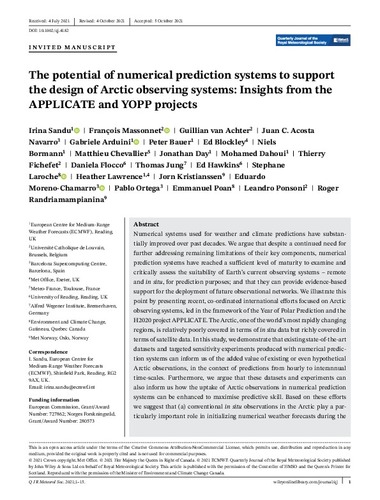 Except where otherwise noted, content on this work is licensed under a Creative Commons license : Attribution-NonCommercial 4.0 International
ProjectAPPLICATE - Advanced Prediction in Polar regions and beyond: Modelling, observing system design and LInkages associated with ArctiC ClimATE change (EC-H2020-727862)
Abstract
Numerical systems used for weather and climate predictions have substantially improved over past decades. We argue that despite a continued need for further addressing remaining limitations of their key components, numerical prediction systems have reached a sufficient level of maturity to examine and critically assess the suitability of Earth's current observing systems – remote and in situ, for prediction purposes; and that they can provide evidence-based support for the deployment of future observational networks. We illustrate this point by presenting recent, co-ordinated international efforts focused on Arctic observing systems, led in the framework of the Year of Polar Prediction and the H2020 project APPLICATE. The Arctic, one of the world's most rapidly changing regions, is relatively poorly covered in terms of in situ data but richly covered in terms of satellite data. In this study, we demonstrate that existing state-of-the-art datasets and targeted sensitivity experiments produced with numerical prediction systems can inform us of the added value of existing or even hypothetical Arctic observations, in the context of predictions from hourly to interannual time-scales. Furthermore, we argue that these datasets and experiments can also inform us how the uptake of Arctic observations in numerical prediction systems can be enhanced to maximise predictive skill. Based on these efforts we suggest that (a) conventional in situ observations in the Arctic play a particularly important role in initializing numerical weather forecasts during the winter season, (b) observations from satellite microwave sounders play a particularly important role during the summer season, and their enhanced usage over snow and sea ice is expected to further improve their impact on predictive skill in the Arctic region and beyond, (c) the deployment of a small number of in situ sea-ice thickness monitoring devices at strategic sampling sites in the Arctic could be sufficient to monitor most of the large-scale sea-ice volume variability, and (d) sea-ice thickness observations can improve the simulation of both the sea ice and near-surface air temperatures on seasonal time-scales in the Arctic and beyond.
CitationSandu, I. [et al.]. The potential of numerical prediction systems to support the design of Arctic observing systems: Insights from the APPLICATE and YOPP projects. "Quarterly journal of the Royal Meteorological Society", Octubre 2021, vol. 147, núm. 741, p. 3863-3877.
URIhttp://hdl.handle.net/2117/357917
DOI10.1002/qj.4182
ISSN0035-9009
Publisher versionhttps://rmets.onlinelibrary.wiley.com/doi/full/10.1002/qj.4182
Collections
Share: