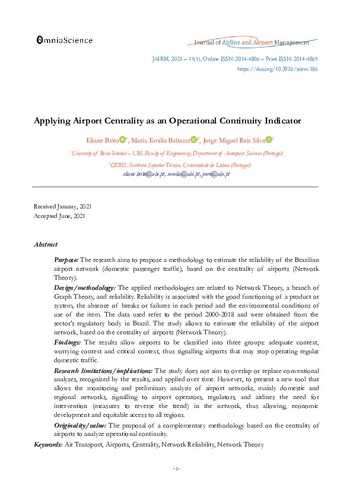 Except where otherwise noted, content on this work is licensed under a Creative Commons license : Attribution-NonCommercial 4.0 International
Abstract
Purpose: The research aims to propose a methodology to estimate the reliability of the Brazilian airport network (domestic passenger traffic), based on the centrality of airports (Network Theory). Design/methodology: The applied methodologies are related to Network Theory, a branch of Graph Theory, and reliability. Reliability is associated with the good functioning of a product or system, the absence of breaks or failures in each period and the environmental conditions of use of the item. The data used refer to the period 2000-2018 and were obtained from the sector's regulatory body in Brazil. The study allows to estimate the reliability of the airport network, based on the centrality of airports (Network Theory). Findings: The results allow airports to be classified into three groups: adequate context, worrying context and critical context, thus signalling airports that may stop operating regular domestic traffic. Research limitations/implications: The study does not aim to overlap or replace conventional analyses, recognized by the results, and applied over time. However, to present a new tool that allows the monitoring and preliminary analysis of airport networks, mainly domestic and regional networks, signalling to airport operators, regulators, and airlines the need for intervention (measures to reverse the trend) in the network, thus allowing, economic development and equitable access to all regions. Originality/value: The proposal of a complementary methodology based on the centrality of airports to analyze operational continuity.
Location
1: Novo Progresso - State of Pará, 68193-000, Brasil
CitationBrito, E.; Baltazar, M.E.; Reis Silva, J.M. Applying Airport Centrality as an Operational Continuity Indicator. "Journal of Airline and Airport Management", Juny 2021, vol. 11, núm. 1, p. 1-15.
URIhttp://hdl.handle.net/2117/357882
DOI/10.3926/jairm.186
ISSN2014-4806
Collections
Share: