On Preconditioning Variable Poisson Equation with Extreme Contrasts in the Coefficients 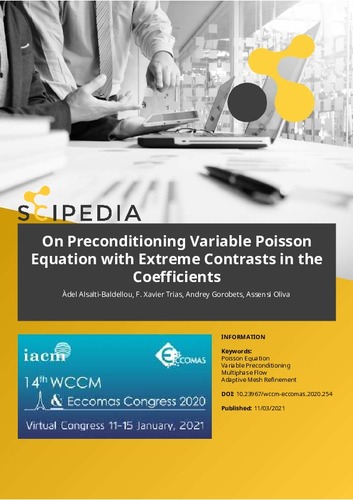 Document typeConference report
PublisherInternational Centre for Numerical Methods in Engineering (CIMNE)
Rights accessOpen Access
Abstract
It is well known that the solution by means of iterative methods of very ill-conditioned systems leads to very poor convergence rates. In this context, preconditioning becomes crucial in order to modify the spectrum of the system being solved and improve the performance of the solvers. A proper balance between the reduction in the number of iterations and the overhead of the construction and application of the preconditioner needs to be sought to actually decrease the total execution time of the solvers. This is particularly important when considering variable coefficients matrices as, in general, its preconditioners will also be variable and need to be updated regularly at an affordable cost. In this work we present a family of variable preconditioners designed for the effective solution of variable Poisson equation with extreme contrasts in the coefficients, which represents a particularly challenging case as it translates into a variable and extremely ill-conditioned system arising in many situations such as with multiphase flows presenting high density ratios or in the presence of highly-stretched adaptive mesh refinements. Finally, the results of the numerical experiments performed are presented and discussed, confirming our preconditioners as extremely affordable, highly-parallelizable and easy-to-implement alternatives to the more standard (and usually unfeasible) preconditioners, still showing great improvements in the rate of convergence of the solvers without requiring the variable coefficients matrix to be explicitly rebuilt at each iteration.
CitationAlsalti Baldellou, À. [et al.]. On Preconditioning Variable Poisson Equation with Extreme Contrasts in the Coefficients. A: World Congress on Computational Mechanis and European Congres on Computational Methods in Applied Sciences and Engineering. "14th WCCM & ECCOMAS Congress 2020 virtual congress 11-15 January, 2021". Barcelona: International Centre for Numerical Methods in Engineering (CIMNE), 2021, p. 1-12. ISBN 978-84-121101-7-3. DOI 10.23967/wccm-eccomas.2020.254.
URIhttp://hdl.handle.net/2117/357841
DOI10.23967/wccm-eccomas.2020.254
ISBN978-84-121101-7-3
Publisher versionhttps://www.scipedia.com/public/Alsalti-Baldellou_et_al_2021a
Collections
Share: