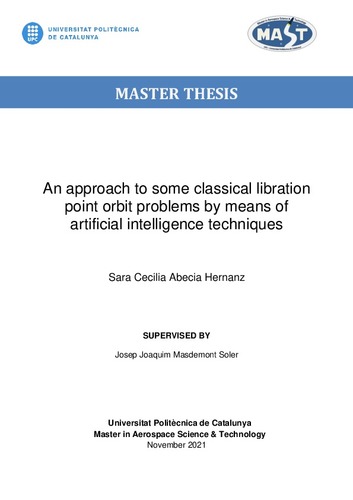 Document typeMaster thesis
Rights accessOpen Access
All rights reserved. This work is protected by the corresponding intellectual and industrial property rights. Without prejudice to any existing legal exemptions, reproduction, distribution, public communication or transformation of this work are prohibited without permission of the copyright holder
Abstract
Rapid developments in the last decade have demonstrated the potential of new techniques within the Artificial Intelligence (AI) field as an effective approach for different classical problems in the area of astrodynamics. Pathfinding strategies in multi-body dynamical regions of space implies some challenges which have traditionally relied on simplifications of the dynamical model or heavy computational loads. However, modern machine learning techniques are likely to provide more lightweight solutions that could be applied to automated on-board guidance systems in future missions traveling though complex environments. This work aims to leverage Artificial Neural Network techniques to study how they can be applied to Libration Point Orbits in the Circular Restricted Three-Body Problem. In particular, new ANN-approaches to compute heteroclinic connections between planar Lyapunov orbits are proposed, and their performance is compared to that of classic methodologies. In order to train, validate and test the ANNs used throughout the work, sufficiently large datasets containing information that accurately represents the dynamics of the Circular Restricted Three-Body Problem are required. To this effect, the datasets are generated by means of solving the problem using well-known classic techniques, since it is the only way to acquire an ensemble of accurate observations of the model. The following steps are taken: first, the heteroclinic connections are computed with arbitrarily high accuracy by numerical propagation of the unstable/stable invariant manifolds of the departure/arrival orbits respectively, using a Runge-Kutta 45 integrator; second, the data from the propagations are tabulated and stored in datasets; third, the datasets are used to train and validate a series of ANNs; and finally, the performance of the obtained ANN models is analysed and compared to the benchmark results. Also, the influence of the sampling technique when generating the datasets and the robustness of the developed method are studied. As a result of this work, it can be concluded that the two new ANN methods developed here can be considered as good as the classical method on terms their fitness to be used as a seed in a realistic ephemeris model, since the Restricted Three Body Problem model used here as a reference is also not an accurate representation of realistic trajectories anyways, but it is an acceptable approximation in early stages of mission design.
SubjectsOrbits, Òrbites
URIhttp://hdl.handle.net/2117/357626
Collections
Share: