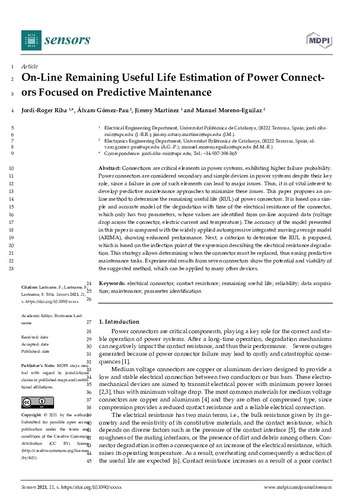 Document typeArticle
PublisherMultidisciplinary Digital Publishing Institute (MDPI)
Rights accessOpen Access
Abstract
Connections are critical elements in power systems, exhibiting higher failure probability. Power connectors are considered secondary simple devices in power systems despite their key role, since a failure in one such element can lead to major issues. Thus, it is of vital interest to develop predictive maintenance approaches to minimize these issues. This paper proposes an on-line method to determine the remaining useful life (RUL) of power connectors. It is based on a simple and accurate model of the degradation with time of the electrical resistance of the connector, which only has two parameters, whose values are identified from on-line acquired data (voltage drop across the connector, electric current and temperature). The accuracy of the model presented in this paper is compared with the widely applied autoregressive integrated moving average model (ARIMA), showing enhanced performance. Next, a criterion to determine the RUL is proposed, which is based on the inflection point of the expression describing the electrical resistance degradation. This strategy allows determination of when the connector must be replaced, thus easing predictive maintenance tasks. Experimental results from seven connectors show the potential and viability of the suggested method, which can be applied to many other devices.
CitationRiba, J. [et al.]. On-line remaining useful life estimation of power connectors focused on predictive maintenance. "Sensors", 27 Maig 2021, vol. 21, núm. 11, p. 1-16.
URIhttp://hdl.handle.net/2117/357335
DOI10.3390/s21113739
ISSN1424-8220
Publisher versionhttps://www.mdpi.com/1424-8220/21/11/3739
Collections
Share: