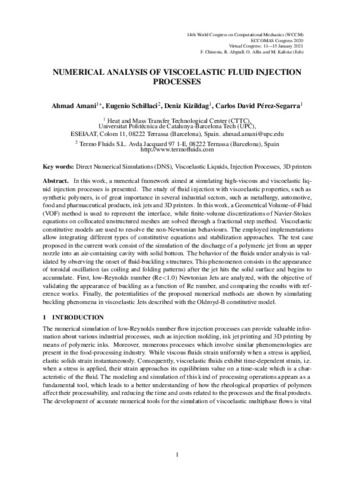 Document typeConference report
Rights accessOpen Access
Abstract
In this work, a numerical framework aimed at simulating high-viscous and viscoelastic liquid injection processes is presented. The study of fluid injection with viscoelastic properties, such as synthetic polymers, is of great importance in several industrial sectors, such as metallurgy, automotive, food and pharmaceutical products, ink jets and 3D printers. In this work, a Geometrical Volume-of-Fluid (VOF) method is used to represent the interface, while finite-volume discretizations of Navier-Stokes equations on collocated unstructured meshes are solved through a fractional step method. Viscoelastic constitutive models are used to resolve the non-Newtonian behaviours. The employed implementations allow integrating different types of constitutive equations and stabilization approaches. The test case proposed in the current work consist of the simulation of the discharge of a polymeric jet from an upper nozzle into an air-containing cavity with solid bottom. The behavior of the fluids under analysis is validated by observing the onset of fluid-buckling s tructures. This phenomenon consists in the appearance of toroidal oscillation (as coiling and folding patterns) after the jet hits the solid surface and begins to accumulate. First, low-Reynolds number (Re<1.0) Newtonian Jets are analyzed, with the objective of validating the appearance of buckling as a function of Re number, and comparing the results with reference works. Finally, the potentialities of the proposed numerical methods are shown by simulating buckling phenomena in viscoelastic Jets described with the Oldroyd-B constitutive model.
CitationAmani, A. [et al.]. Numerical Analysis of Viscoelastic Fluid Injection Processes. A: European Congress on Computational Methods in Applied Sciences and Engineering. "14th World Congress on Computational Mechanics (WCCM), ECCOMAS Congress 2020): virtual congress: 11-15 January 2021". p. 1-10.
URIhttp://hdl.handle.net/2117/357183
Publisher versionhttps://www.scipedia.com/public/Amani_et_al_2021b
Collections
Share: